A G.U.N. outpost on the ocean.

Metal Harbor is the fourth stage of the Hero story in Sonic Adventure 2 and Sonic Adventure 2: Battle, and is playable as Sonic the Hedgehog. As the name suggests, the harbor is built of metal, and consists of many shipping yards and aircraft launch sites scattered around the area.

Unsurprisingly, the construction of the harbor leads to an abundance of Rails, all of which can be grinded upon. As Sonic races through this level, he encounters many G.U.N. robots trying to stop him from escaping, as well as fighter jets.

Sonic must escape from Prison Island after being freed by Amy. G.U.N. is aware that Sonic has escaped, and several bomber planes have been deployed in an attempt to impede his progress. At the end, Sonic hitches a ride with a missile in order to escape the military base.

1st Mission: Escape from the military base!

Sonic is freed from his cell and can now get away from the base. This stage is fairly easy, but there are parts where Sonic must use the Light Speed Dash and Homing Attack to get across gaps. During the missile segment, Sonic can quickly take a shorter path to get on and slide down inside of it. He then jumps off the missile and goes through a tunnel on a Snowboard and rides through a loop-de-loop to reach the Goal Ring.

To make this mission even easier and quicker, Sonic must have the Bounce Bracelet from Pyramid Cave first. Most of the Rings are in plain sight, and many can be Light Speed Dashed across. In the large area with the Wooden Containers, Sonic can collect Rings from inside them and use the Bounce Attack to reach the higher ones.

Sonic will need the Mystic Melody, along with the Bounce Bracelet, to complete this mission. This can be tricky due to where the Chao is located. In the area with the Wooden Containers, Sonic must bounce himself up to the Ancient Ruin and play the Mystic Melody. This will cause some platforms to appear, and Sonic can jump to them. The player must then carefully jump over more platforms to reach the lost Chao.

This is a very strict time limit to complete this level. From the beginning, the player should immediately Light Speed Dash across the Rings after the Mono Beetles to shave off some time. Sonic should then quickly run through the level while ignoring the G.U.N. robots and quickly grab onto the missile. There are no Point Markers in the stage for this mission.

Not much differs from the basic layout in this mission, except for an increased number of enemies. However, the missile is completely absent and the player must instead use the Homing Attack to skip across some enemies. Otherwise, it is simple to earn a high score and complete this level.

Big the Cat is seen fishing near the last Point Marker of this stage.

There are a number of differences between the main stage and the multiplayer version. Notable ones are that Springs replace the need to Homing Attack or Light Speed Dash across gaps. The Goal Ring has been moved to where the lower point Sonic could grab onto the missile was, as it no longer launches. The Level Up Item is replaced with four Ring Item Boxes. There are also metal platforms with Springs that take the player to the missile, instead of the Rocket that normally takes Sonic there. 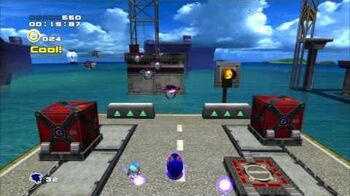 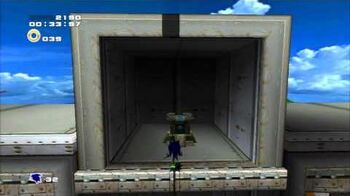 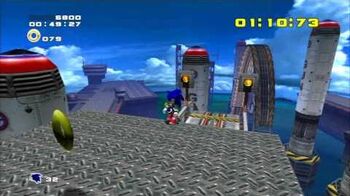 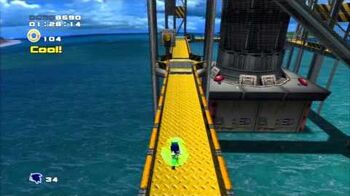