Sonic the Hedgehog #240 (only appearance)

None (referred to as female)

Metal Amy is a character that appears in the Sonic the Hedgehog comic series and its spin-offs published by Archie Comics. It is a robotic counterpart of Amy Rose and a member of Dr. Eggman's Metal Series robots.

Metal Amy was created in the image of Amy Rose , and is thus mostly built of pink and red metal. Her head has metal fins pointing downwards, and others three metal fins above her eyes, resembling Amy's quills, and a pair of triangular "ears". She possesses as well a red torso with a conical end with a rocket exhaust on its rear. Metal Amy has a metalic muzzle, upper arms, hand and fingers made out of silvery metal. She also has green eyes with black sclerae and pupils.

Metal Amy was created during plans to destroy New Mobotropolis. Along with Metal Sonic and Metal Tails, it was sent out to capture the citizens of the city. Metal Amy was short-lived, however, as it was destroyed by Big the Cat, with some help from Secret Freedom Fighter "Ace".[1] 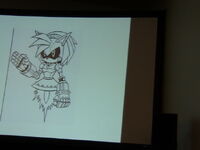