Hi, XxTinkaStarxX. One of the images you have uploaded contains an inappropriate expletive in its name. Here at the Sonic News Network, we have a zero-tolerance policy on profanity on the basis that younger viewers have access to this website, and as such, this image will be renamed or maybe deleted. I suggest you reconsider the rules before uploading images with such filenames again. Thank you. THE REFLEX dancing on the valentine 09:44, December 25, 2012 (UTC)

It's okay, everything's fine now. Just make sure to read the filename before uploading an image. Oh, and Merry Christmas! THE REFLEX dancing on the valentine 00:54, December 26, 2012 (UTC)

Look at the history. The latest edit (the one at the very top) should have been made by me. On the very right of that row (to the right of my comment: "I tried. Per request of user."), there should be an undo button. Click on that, and it will open the editor. Publish your edit, and your sig will be back to normal. :) Twinkle Snow Unleash Christmas 2013 17:09, December 26, 2012 (UTC)

I see. To be honest, I really have never been on chat, due to me not knowing a whole lot of people there. Though I might change my mind in the future eventually...

Hey Tinka. Sorry to inform you of this, but those images you have uploaded on a recent blog are filenames that begin with numbers, which violate our image policy. As such, they are to normally be deleted, though I can rename them to specific names for you if you'd like! Serious Sam

I wish you luck in the next few months as well! Serious Sam

You can either choose the All hedgehog one or the individuals and if you feel like it,, you can use the trio as a banner on the top of your page. 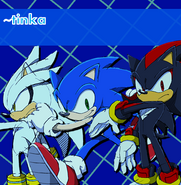 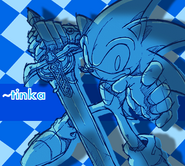 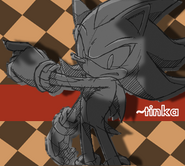 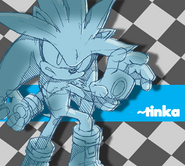 Top or Bottom banner (optional)
Add a photo to this gallery

Hey Tinka, just a reminder that you recently re-uploaded a series of S&ASRT achievement images, which have just been deleted and replaced with the original files. We do not accept duplicate files on the wiki, so please keep this in mind the next time you're editing. Thanks! Serious Sam

Aw, really? That stinks. Well, at least we're talking...I think. XP Anyway, I just released my latest comic today; I hope everybody enjoys the climax of the story.

Your signature looks very nice! You both did a great job on it. :) I've just been relaxing lately. I needed a short break from a fanfic series that I've been writing for a while. I'm aiming to have it completed this weekend.   ★EYCEST★R★    ★Contact★ 21:42, January 25, 2013 (UTC)

I'm not sure what you're talking about...I'll be in class at noon, and I might be doing something Friday night. But I'll try to stay tuned on Friday for whatever it is you're planning. Twinkle Snow Unleash Christmas 201318:27, February 4, 2013 (UTC)

Retrieved from "https://sonic.fandom.com/wiki/Message_Wall:MintsyWinterBlue/TS_Archive_2"
Community content is available under CC-BY-SA unless otherwise noted.