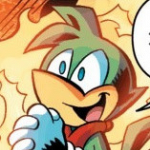 aka That guy who makes Sprite Comics.

This is my message wall. If you have anything to ask me, just type it in below, and I'll try to answer your questions as soon as I can!