Mephiles the Dark is one of Shadow's bosses in Sonic the Hedgehog (2006). The player encounters him in two battles, first after defeating Iblis Phase 2, and finally after clearing Dusty Desert. Both boss fights are also included in the DLC stage, Shadow Boss Attack.

Such foolishness... very well, let's see if you can entertain me.

The battle is played in two parts: the player controls Shadow in the first part and Omega in the second. In the first part of the battle, Mephiles can be seen in the ground, becoming Shadow’s shade. The player cannot hit Mephiles in this state, although Mephiles himself will not attack at all. Instead, he commands his Shadows to attack. The player must store up enough Light Cores to fill the Action Gauge and activate Chaos Boost by destroying the minions. The monsters swarm the player throughout the battle, grabbing onto them should the player get too close. If enough underlings grab the player, they will explode and deal damage. Attacking the under-lings one at a time with Homing Attacks takes too long. Instead, the player should wait for the underlings to surround them, then use Shadow’s Spin Kick to eliminate several at a time.

When the player activates Chaos Boost, the underlings retreat and Mephiles takes his corporeal form. At this point, the player can attack Mephiles directly. When the Action Gauge is completely drained, Mephiles becomes a shadow again and the player must reﬁll the gauge by destroying the Shadow. Mephiles attacks with purple energy balls that grow in size as they chase you through the arena. The best course of action is to dodge these, though it is advised to close the grab between Mephiles and the player. The player can damage Mephiles with Homing Attacks, but he will often slip away. Freeze Mephiles for a few seconds with a Chaos Lance and move in for a Chaos Attack.

For the second part of the battle, the player controls Omega while Mephiles remains in his physical form for the entirety of the ﬁght. Mephiles will try to hide behind his horde of underlings, so use Omega’s Lock-On Shot to keep the distance and target multiple enemies. As long as Mephiles is directly in front of the player when in the targeting phase, one of the shots is likely to hit him when the player release the attack button. After the player strikes Mephiles a couple of times, he sends forth his Shadows to dive at the player. When this happens, run around the arena to avoid getting pelted by them as they smash down towards the ground. Mephiles also fires the purple energy balls at the player. These balls move in a straight line, so as long as the player keeps moving, none of them will hit Omega. Do not try to target Mephiles during this attack, because as soon as the player slows down to line up a shot, he will blast Omega with a purple ball. Keep repeating this until Mephiles is defeated.

It should be noted that in Shadow Boss Attack, only the first part of the fight is played. 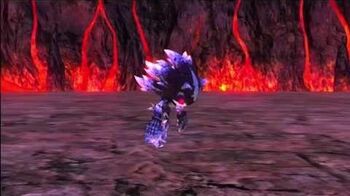 I'll make sure you regret this, Shadow the Hedgehog.

The player will not be able to damage Mephiles when the battle begins as he will simply block any attacks from the player. Rather, the player should pick up Rings around the arena. Eventually, the Shadows hovering around in the air will begin to fall and dive into the arena at random areas, damaging the player on contact. Afterwards, Mephiles himself will dive and disappear into the ground. Soon, up to four Mephiles's monstrous form enemies begin to form from the ground at four different points of the arena. After some time, they will attack by firing a laser out of their eyes or slamming their hands at the ground. As they prepare to attack though, the player should attack their flashing "eye-like" cores (ideally with the Homing Attack). The player has to defeat enough of them to earn Light Cores to fill up the Action Gauge in order to use the Chaos Boost.

Once the Chaos Boost is activated, the ground returns to normal and any of the monstrous form enemies will dissipate. Mephiles will spawn up from the ground, allowing the player to attack him. If the Action Gauge is depleted, the player would need to repeat the above to fill the Action Gauge to use Chaos Boost again. Much like the previous battle, if the player attacks Mephiles a few times, he will move around the arena to get away from the player and will try to fight back. He can unleash purple energy balls across the arena, sometimes attacking with multiple clones in order to distract the player from the real enemy. Towards the end, Mephiles will move slowly into the air in a spiral motion, releasing a clone at intervals. The player will need to follow Mephiles using the Homing Attack at the clones as "steps" to reach Mephiles to deal the final blow and defeat him. 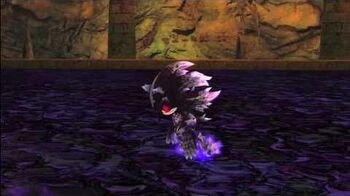