Mephiles[1] is a character in the Sonic the Hedgehog comic series and its spin-offs published by Archie Comics. He is an evil smoky spirit and the power and intelligence of Solaris who took the shape of Shadow the Hedgehog. After being split from his original form, Mephiles sought to end all existence, but was erased from the timeline.

Mephiles was born during an experiment with Solaris conducted by the Duke of Soleanna and his researchers in an attempt to harness Solaris' time-warping powers. The resulting experiments split Solaris in two, creating Mephiles and Iblis, Solaris's fiery power and destructive nature. After his birth, Mephiles was trapped inside a device called the Scepter of Darkness by Shadow the Hedgehog.[1]

Years later, Mephiles was released and stole Shadow's shape and abilities by merging with his shadow. Planning to rejoin with Iblis, Mephiles created a plan that spanned over two hundred years, brought him the seven Chaos Emeralds, saw the death of Sonic the Hedgehog and the release of Iblis from within Princess Elise. With the power of the Chaos Emeralds, Mephiles rejoined Iblis and Solaris was reborn. Before Solaris could destroy all of time, however, it was defeated by an alliance of villains, heroes and a revived Sonic. Mephiles' existence was then fully erased from the timeline when Sonic and Elise traveled back in time to the days before Solaris was experimented upon where Elise snuffed out the tiny white flame that was Solaris.[1]

Despite this time paradox that seems to have safely dealt with Mephiles, it is suspected he could have slipped through a crack in time.[1]

Mephiles was described as a brilliant and cruel individual, perfectly willing to kill others for his own gain.[1]

Mephiles possessed both the power and intelligence of Solaris. He was very intelligent and cunning, orchestrating a successful plan spanning two hundred years that brought him the seven Chaos Emeralds, the release of Iblis and the death of Sonic, all according to his design.[1]

Mephiles had the ability to copy a person's shape and abilities by merging with said person's shade, like what he did to Shadow to gain his appearance and powers.[1]

Mephiles and Void in the Zone Jail. 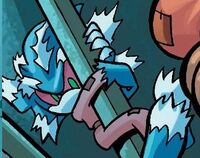 Mephiles escaping the Zone Jail.
Add a photo to this gallery

Retrieved from "https://sonic.fandom.com/wiki/Mephiles_(Archie)?oldid=2280982"
Community content is available under CC-BY-SA unless otherwise noted.