Fusing with Shadows while empowered by Chaos Emeralds

Mephiles' monstrous form[1] is the term used to describe the transformed state of Mephiles the Dark in Sonic the Hedgehog (2006). It is achieved by Mephiles by fusing himself with several of his minions using the empowered darkness from a Chaos Emerald.

This form consists of four giant shadows encountered during the second boss battle with Mephiles, where they will spawn endlessly from the ground which is cloaked in darkness.

This form is completely invulnerable to attack in all places other than its eye, which will open after Mephiles fires his laser. The player must hit the eye several times to destroy the monstrous form, which can be easily done with the Chaos Attack. When destroyed, this form will release enough Light Cores to fill approximately 25% of the Action Gauge, which is needed to activate the Chaos Boost. After activating the Chaos Boost, Mephiles' transformation will be instantly negated.

In combat, Mephiles attacks either by shooting his lasers over a wide area or hammering into the ground which will create shock waves that will damage the player. After creating his shockwaves, he will sink back into the ground, only to re-emerge shortly afterwards.

In this state, Mephiles has great physical strength, enough to create shock waves by hammering into the ground. He can also fire a powerful purple laser from his eye. 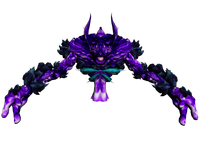