ALL-NEW DIRECT MARKET-EXCLUSIVE special! There are so many epic battles in the SONIC/MEGA MAN crossover event that the biggest brawls of the bunch have exploded into their very own book! This extra-special bonus issue features exciting duels spilling over from the pages of the much-talked about “Worlds Unite” event, and feature an all-star cast of creators! Watch Mega Man bring the ruckus to the Deadly Six, the Maverick Hunters ultimate showdown with Vile and Dr. Light’s Robot Masters tussle with the unstoppable power of hero-turned-uber-villain Sonic Man! LET’S GET READY TO RUMBLE! Also featuring variant art from Patrick “SPAZ” Spaziante, and a special wrap-around cover and sketch variant by Sonic and Mega Man superstars Evan Stanley & Jamal Peppers!

While on a supply run for Light Labs, Rock is contemplating his sister Roll's concern for him but is confident that nothing bad is going to happen. Suddenly, Zomom of the Deadly Six falls on him and smashes the vehicle, the impact throwing Rock out. Mega Man, preparing for battle, wonders if it is a Yellow Devil. Master Zik attacks Mega Man, followed by Zazz. Mega Man wonders if they are robots or not as he cannot harm living beings. Unfortunately, he has little time to figure it out, as he is then attacked by Zazz, who deals him a number of slashes. He punches Zazz, who complains that it hurt, but Mega Man notes that he is not being gentle either. Zomom grabs Mega Man in the air and spins down at high speed, smashing him in the ground and throwing him at some trees.

In the forest, Master Zik levitates several apples and starts throwing them at Mega Man, who asks him to stop. Master Zik then jumps and starts throwing several energy spheres from his hands, followed by Zazz and Zomom. After a huge blast, Mega Man lays down on the ground, apparently defeated. Remembering his family, Mega Man gathers his strength and stands up, saying that Roll will not get to say "I told you so" because of them. He prepares to fire a charge shot, but Master Zik uses his ability to control machines and forces Mega Man to aim for his own head, knocking him out. A Genesis Portal opens and the three Zeti take Mega Man to Sigma.

Starting where it left off when X went ahead to confront Sigma, Zero and Axl face Vile just outside Sigma's lair. As they are fighting, Axl proceeded to realize the guy was Vile (implying that he had heard of the infamous Maverick from X/Zero, but never actually saw him until that point), and mentioned that he never had the pleasure of "kicking [Vile's] butt!" while shooting at him with his Axl Bullets, while Zero proceeded to tell him to strike him hard and fast, and not give Vile a chance to counter. Vile then cackled in return and told them that they shouldn't have sent X ahead as they were going to need the help they can get while firing at him with his cannon. Axl and Zero then proceeded to hide behind their downed Ride Chaser for cover, with Axl then proceeding to jab Zero about how Vile apparently used to be a hunter, and how Zero seemed to give him a hard time when he wanted to join, only for Zero to tell him that now was not the time. Vile then pulled their Ride Chaser, yelling at the two to quit hiding while denouncing them as cowards, forcing them to move. Zero inquired Axl if he copied any enemy data on the way in, with Axl confirming it confidently, Zero then stating that he should get into flanking position as he is charging up his Zero Buster. He then fires at the Ride Chaser Vile grappled with his energy mace, causing it to explode above Vile and drop debris on him. A Maverick appears to assist Vile, but Vile orders him to return to the front lines as he alone can handle "the pretty boy and the kid", and as the Maverick points a gun to him, he realizes he is Axl and barely avoids the shots. Vile attacks him, saying that was a cheap shot, and Axl falls back, giving cover to Zero approach Vile and attack with his Z-Saber. Vile defends the hits by spinning his mace and hits Zero with his shoulder cannon, injuring him.

Vile continues attacking the Hunters by firing the cannon in his arm, saying that no one will enter Sigma's fortress, but he suddenly stops moving. Silver the Hedgehog used his telekinetic powers to stop Vile, saying that he must enter the fortress as there is a Genesis Portal inside. Axl is confused if the new guy is a Hunter or even a Reploid, and Silver asks why the two were fighting the guy he stopped. As Zero says they want to pass him to stop a madman inside the fortress, Silver tells them to proceed to the fortress, with Zero going while Axl continues talking. In the fortress, X tells Zero that Sigma went inside a portal, and Zero asks if it was a "Genesis Portal". Believing that Silver knows about it, Zero calls X to talk with him about it.

Around the time Sonic Man and M'egga Man are attacking Mega City and Mobotropolis, respectively, Drs. Eggman and Wily are observing the conflict. As the news reports are reporting on the attacks by the unidentified Robot Masters as well as Unit 84 being ordered to fall back (with some speculation of Dr. Wily somehow being involved), Wily and Eggman are watching with amusement at the carnage, with Dr. Eggman complimenting Wily on having the sync ratio work together with his metabolic stabilizers was the best in any roboticization effort he has yet seen. Wily then explained that the process was simple: He appropriated the processor he developed for his Robot Master Quick Man to appropriate the biometric feedback of Sonic, and also complimented Eggman by stating that it only was matched by his merging the Eggbot schematics with Mega Man. Eggman then briefly lamented that such a combined effort of their genius would be short lived, but then gloated that seeing them fight each other only to realize that Sigma (whom he called an "anachronistic blockhead") played them would be well worth the short-lived experience, with Wily agreeing before offering him a chair to sit in since it's "showtime."

Meanwhile, at Mega City, the eight Light Robot Masters (Cut Man, Guts Man, Ice Man, Bomb Man, Fire Man, Elec Man, Oil Man, and Time Man) have arrived to face Sonic Man, with Fire Man briefing the Robot Masters that Sonic Man's fast, but if they work together and stick to the plan, they'll defeat him and be out of the area faster than him before asking if they are ready, with Time Man mentioning that he's always ready. As the civilians proceed to evacuate the premises while Sonic Man is still firing on everything, Time Man proceeds to use Time Slow on his opponent, attempting to inquire how fast Sonic Man will go with the Special Weapon slowing him, only to see Sonic Man notice him, causing Time Man to interrupt himself and express disbelief at how Sonic Man is not even being slowed down in a significant manner at all despite being hit with the ability, and receives a strong hit from the robot.

Fire Man yells to the other to go to "plan B", but before they start attacking, Sonic Man imobilizes Cut Man with his Ring Launcher and knocks down Oil Man. Guts Man jumps on Sonic Man and smashes him down to the ground, and as Guts Man jumps away, Ice Man freezes the robot before he stands up, and Elec Man electrifies him. They believe Sonic Man is down, but he breaks from the ice and paralyzes Elec Man with his Ring Launcher. Fire Man attacks him with Fire Storm, but Sonic Man defends by throwing Ice Man in the flames, burning him and forcing Fire Man to stop the attack to avoid further damage to his friend. As Bomb Man prepares to throw a Hyper Bomb, Sonic Man uses his speed to drop the bomb near the Robot Masters, the explosion damaging all of them. Bomb Man assist the collapsed Guts Man and Ice Man, and a weakened Elec Man tells Fire Man to call Dr. Light as they can't defeat it. 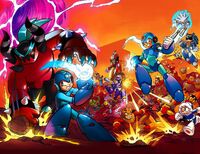