The Mega Mack is a pink liquid with texture seemingly identical to that of water. Its properties are inconsistent, though. Western materials refer to Mega Mack as a toxic liquid which can poison Sonic in a manner of minutes,[1] while Japanese sources simply refer to it as water with an odd coloring.[2] Regardless, Tails has been unnerved by Mega Mack, hinting that it is indeed an unpleasant substance.[3]

Mega Mack made its first appearance in Sonic the Hedgehog 2 (16-bit). It is mentioned in Western manuals that Dr. Robotnik flooded the Chemical Plant Zone with Mega Mack to poison Sonic.[1] This is not mentioned in the Japanese manual.

In gameplay, the Mega Mack has no Air Bubbles in it, so it is easier to drown in. Also, the Chemical Plant Zone boss, the Egg Poison, uses Mega Mack as part of its attack pattern. It will fill up his canister with Mega Mack and attempt to dump it on Sonic or Tails. Additionally, the rotating platforms that the battle takes place on will dump the player into the Mega Mack, which will result in an instant death.

In gameplay, the Mega Mack functions the exact same as it did in Sonic the Hedgehog 2, being easy to drown in as it lacks Air Bubbles.

In the console/PC version of Sonic Generations, Mega Mack appears in the Chemical Plant. It retains all of its properties from Sonic the Hedgehog 2, except that it also contains Air Bubbles.

In Sonic Mania and its expansion Sonic Mania Plus, the pools of Mega Mack made a reappearance in Chemical Plant Zone. They primarily appear in Act 1.

During the mini boss fight in Act 1 and more regularly in Act 2, there will be pools with boiling-hot Mega Mack that can damage the playable character if they touch it. There are also pools filled with a bouncy cyan chemical, commonly referred to as "jelly".[4] Jelly is a substance that the playable can walk and bounce on when jumping. The height of the bounce is determined by the type of jelly. This is usually required so the player can access higher pathways in the Zone. 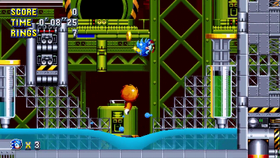 The cyan jelly pool in Chemical Plant Zone Act 2, from Sonic Mania. Spin Jumping to the pool only bounces the player further upwards. 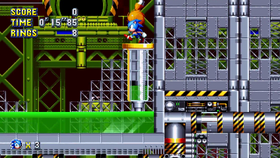 By inserting green chemical from the large syringe into the jelly pool changes its color and generally increases the bouncing height noticeably, from Sonic Mania.

In Sonic Forces, Mega Mack makes another return inside the Chemical Plant. In this game, it appears in two stages.

In Chemical Plant, Classic Sonic sneaks into the plant in search of a database. Along the way, pools of Mega Mack can be found in certain areas of the plant. There are fans in these pools for lifting Classic Sonic up to the surface however. The infamous Mega Mack section from Sonic the Hedgehog 2 also returns, but at the platform over the pool, there are more fans to push Classic Sonic back up so he does not fall back down and has to start the section all over.

In Network Terminal, Sonic infiltrates the Chemical Plant in search of the main computer. Here, gushes of Mega Mack are constantly pouring down from above. If Sonic jumps over a pit while the Mega Mack is pouring out, it will push him down into the pit. Also, if he is standing on a filter where the Mack pushes through and it pours on him, it will hinder his speed and ability to jump. In some cases however, the Mega Mack columns can also push around rotating platforms, thus allowing the player to get higher elevation.

In the Sonic the Hedgehog television series, the Mega Mack is referred to as Mega Muck. Also, instead of being a poisonous liquid, it is a glutinous substance which is used to impede Sonic the Hedgehog's movements, similar to super glue.

In Sonic Underground, Mega Mack is referred to as Mega Muck. It is a substance used by Dr. Robotnik in an attempt to capture Sonic.

After the events of "Worlds Collide," the Mega Mack became seemingly identical to its game counterpart.

In the Sonic the Comic series published by Fleetway Editions, Mega Mack is a poisonous substance designed by Dr. Robotnik and another scientist specifically for the purpose of killing Sonic. While toxic in its own right, the Mega Mack will fatally poison Sonic after prolonged exposure.

The second scientist who worked with Robotnik to invent the Mega Mack was caught in a chamber that flooded with Mega Mack, but instead of dying he was transformed into the villain Megatox, whose body is made up entirely of the substance.

Early on in the Sonic series, Mega Mack, which was also referred to as megamalatricarboSonichloride, was discovered by chance when Dr. Robotnik was fiddling around with chemicals to employ against Sonic, which he marketed as "Mega Mack." The substance was described as extremely lethal, turning anything submerged in it magenta before killing it in less than a minute. However, it was also highly corrosive, disintegrating the barrels for storing it in a few hours. This gave Robotnik the idea of using the Mega Mack to flood the Chemical Plant Zone when Sonic would arrive.[5]