Mechanical Zone is a Zone in Sonic Jump Fever which later has been added to the 2012 remake of Sonic Jump as the final zone of the game.

In Sonic Jump, the Zone consists of eleven Acts and a boss fight while in Sonic Jump Fever, there are multiple level layouts in terms of the position of the enemies, platforms and objects and the player can play this Zone as many times possible during a period of two days before the game switches to Jungle Zone. 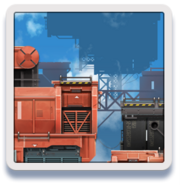 Mechanical Zone's icon in Sonic Jump (2012).
Add a photo to this gallery