This article is about the roboticized form of Tails. For the robot featured in Tails Adventure, see Remote Robot.

Mecha Tails, from Sonic the Hedgehog #118.

Sonic the Hedgehog #118 (only appearance)

Mecha Tails is a transformation that appears in the Sonic the Hedgehog comic series and its spin-offs published by Archie Comics. It is the roboticized form of Tails.

Mecha Tails made its first and only appearance when the Bem abducted Sonic, Tails, Dr. Eggman and Snively. Both Sonic and Tails were Roboticized into Mecha Sonic and Mecha Tails, while Eggman and Snively were de-roboticized, as part of an experiment by the Bem to determine if organic creatures were superior to robots, with the winners reverting to their original state, and the losers staying in their current state forever. Pitting them against each other, the Bem created a holographic recreation of Robotropolis to act as the setting for the battle. As soon as the fight started, Mecha Tails and Mecha Sonic were confronted by Eggman and Snively in a two-legged walker, who launched several missiles at them. Unsurprisingly, however, Mecha Sonic and Mecha Tails survived the large explosion with little damage, and Mecha Sonic soon retaliated by destroying the walker with a missile of his own. Mecha Tails then kept Snively pinned down while Mecha Sonic captured Eggman. Sonic and Tails were then declared the victors of the test, and were de-roboticized.[1] 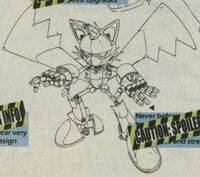 Concept artwork of Mecha Tails, by Patrick Spaziante.
Add a photo to this gallery

Transformations
Retrieved from "https://sonic.fandom.com/wiki/Mecha_Tails?oldid=2284462"
Community content is available under CC-BY-SA unless otherwise noted.