Mecha Sonic, from Sonic the Hedgehog 2.

Sonic must defeat the massive Mecha Sonic before his final showdown against Dr. Eggman in his Death Egg Robot mecha.

Mecha Sonic[4] (メカソニック[5], Meka Sonikku?) is a character that appears in the Sonic the Hedgehog series. It was a robotic copy of Sonic the Hedgehog created by Dr. Eggman. It served as the first line of defense aboard the Death Egg during the West Side Island incident.

Mecha Sonic is a dark gray, bulky robot model based on Sonic the Hedgehog in terms of appearance. The head structure contains pointy ears, sharp saw-blade quills and a round orange eye on a wide black sclera. The robot model also features metallic armor with two arms and orange rocket boosters with tires.

In Sonic the Hedgehog 2, Sonic encountered Mecha Sonic in a large hall right after succeeding to enter the Death Egg. After landing on the other side of the room, Mecha Sonic began having a one-on-one fight with the blue hedgehog, while Dr. Robotnik followed the battle from a small hole in the wall. However, Sonic defeated Mecha Sonic, and then chased down Robotnik to the doctor's last machine.[4]

In Sonic the Hedgehog Pocket Adventure, Sonic encountered Mecha Sonic in Aerobase Zone, where the robot model hatched from the rising orange cockpit to fight Sonic once again. However, the fight ended with Mecha Sonic deactivating after crashing through a wall that led to Gigantic Angel Zone.

In the Nintendo Switch version of Mario & Sonic at the Olympic Games Tokyo 2020, Mecha Sonic appears as the boss of the second stage of the Tokyo Sky Flight mini-game. It attacks by dashing towards Sonic and Mario, and firing its spines while curled up. It must be defeated by depleting its Health Gauge with the Tornado's gunshots.

Mecha Sonic's active quills are able to protect the robot from attacks from behind. These quills are also useful when Mecha Sonic performs its own variant of Sonic's trademark Spin Attack. Much like Sonic, the robot can also dash off from a standstill in its curling ball form akin to the Spin Dash and perform a mid-air jump much like the Spin Jump. Mecha Sonic can fire multiple small spike projectiles while performing the mid-air assault in the curling ball form. With rocket boosters, Mecha Sonic is able to fly or perform rapid, straightforward assaults from the ground.

A tough and bulky Sonic robotic clone. Able to dash across the room, Spin Jump, and shoot small spikes everywhere in mid-spin jump. The player has to hit it eight times in order to defeat it.

The battle with Mecha Sonic starts by standing still for a few seconds before starting to attack. At first, it follows a set number of attack patterns in the following order:

The order of Mecha Sonic's attacks is as follows:

As the battle goes on, Mecha Sonic's attack pattern becomes randomized. After the sixteenth attack pattern on the list, the list will repeat, but with all attack directions being reversed. Between attacks, Mecha Sonic will stand still for a few seconds, leaving it vulnerable. To land any hits on Mecha Sonic at that point, the player has to hit it on the front below its quill ridge with the Spin Jump or Spin Dash. Hitting Mecha Sonic on either its quills while it stands still or during its curling ball mode costs a life of the player.

After taking the eighth hit, Mecha Sonic will be destroyed and the player can proceed to the Death Egg Robot.

In the Sonic the Hedgehog manga series published by Shogakukan, Mecha Sonic was created by Dr. Eggman to serve as a guard onboard large space station Death Egg much like its game counterpart.

In the Sonic the Comic comic series and its spin-offs published by Fleetway Editions, Mecha Sonic (unnamed in this continuity) was a robot created by Dr. Ivo Robotnik when the doctor launched the Death Egg. Like its game counterpart, it encountered Sonic onboard the Death Egg, but was defeated, although it remained functional. Some time later, Sonic and Tails met Mecha Sonic once again upon returning to the Death Egg. However, Sonic defeated it for good by kicking off its head.

In the Sonic the Hedgehog comic series and its spin-offs published by Archie Comics, Mecha Sonic has had several iterations. The first one was referred to as Silver Sonic v1.0. This robot was created by Dr. Robotnik, and engaged Sonic and Tails onboard the Death Egg. Despite its formidable strength though, it was defeated. An updated version of Silver Sonic named Silver Sonic v2.0, created by Dr. Eggman, was later sent to destroy Station Square, but was reprogrammed to protect the city instead, although it was eventually destroyed by Shadow the Hedgehog. After the Death Egg Mark 2 was launched, a third Silver Sonic named Silver Sonic v3.0 engaged Sonic and Sally onboard the Death Egg Mark 2. This model was destroyed over the course of Operation: Clean Sweep, although it would be rebuilt to challenge Team Fighters at one point.

A 4-inch action figure of Mecha Sonic with a bed of Spikes was released by Jakks Pacific in July 2020.

This robot was not named in the English-language manuals accompanying Sonic the Hedgehog 2, but in the Japanese materials he was called "Mecha Sonic," much like other early Sonic robots.

Because of his similarity to Mecha Sonic from the Master System and Game Gear versions of Sonic the Hedgehog 2, Archie Comics used the name "Silver Sonic" for the version of the character in the Sonic Quest miniseries. Many fans adopted this name for the game character, particularly to differentiate it from the radically different design of Mecha Sonic seen in Sonic & Knuckles.

"Mecha Sonic" was used as the official English-language name in the backstory for Sonic the Hedgehog 4: Episode I, released in the Story section of the official English website.[4] This robot's early concept art labeled it as "Meca Sonic", while the Japanese Sonic Jam Official Guide book refers to the robot as "Mechanical Sonic" alongside its accurate pronunciation in katakana: メカソニック (Meka Sonikku).[1]

In a pre-release video for Sonic Generations, it is briefly called both "Silver Sonic" and "Mecha Sonic,"[3] by Aaron Webber, acknowledging the different names this robot has gone under in the fandom. 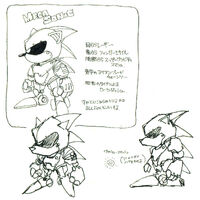