Bulky robotic clone of Sonic with the relatively familiar attack pattern. The player has to hit eight times in order to defeat it.

When Sonic the Hedgehog reaches the field on where the battle is held, a capsule will appear, and Mecha Sonic will emerge. Similar to the battle in Sonic the Hedgehog 2, this model can spin-dash across the floor, and skate across via rocket shoes. When defeated, Mecha Sonic will deactivate, before crashing through a wall leading to the next zone, presumably to warn it's master, and its fate becomes unknown. Mecha Sonic gives very little openings, and actually damaging the boss requires precise timing. Mecha Sonic is able to Spin Dash and zip around the battlefield via flight shoes.

If it endures for a time, it will do a special jump that shoots eight spikes on its highest point. 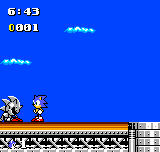