McDonald's is a popular fast-food restaurant company that has been seen with the Sonic the Hedgehog series over the years. The logo is a yellow or golden M. It was founded in the United States in 1940, created by Roy McDonald and Richard McDonald, and was later transformed into a corporation by Ray Kroc.

In a Sega.com interview with Sonic's creator Yuji Naka, he mentions that McDonald's is a place that Sonic and his friends like to eat at.[1]

In 1994, McDonald's promoted the release of Sonic the Hedgehog 3 for the Sega Genesis/Mega Drive by giving away Sonic the Hedgehog toys in their Happy Meals. Four characters were produced: Sonic, Knuckles, Tails and Dr. Robotnik.

In America, the promotion went from February 4 to March 3 of 1994 and there was a sweepstakes where up to 10,000 participants could win a free copy of Sonic the Hedgehog 3 for the Sega Genesis. For children under the age of 3, they had an alternative toy which was a yellow ball with a picture of Sonic on it and the classic "Sonic the Hedgehog" logo. Due to this toy only being advertised in small text on in-store displays, aimed towards 3-year-olds and parents having to specifically ask for it while ordering their food, the Sonic Ball is much rarer than the other toys.[2]

Despite being a Sonic 3 promotion, Dr. Robotnik is designed to look like he does in the Adventures of Sonic the Hedgehog cartoon series (although the stock art on the bag for the toy depicts him as he looks in the games).

Later in 1994 the set then released at Canada and Puerto Rico. The set in Canada didn't include the Tails toy, however the design of the Sonic Ball was replaced with Tails and wasn't exclusively for children under 3.[2]

The United Kingdom got the set from January 27 to February 24 in 1995, Germany and Belgium in March, and finally in June for New Zealand and Japan.[3] When the set released in these countries (except Japan), they changed the design of the Tails toy as they were worried kids would get hurt by the toy when it launched off the base. The updated toy had Tails stay connected to the base with only his tails spin. The base resembles one of the spinning tops as seen in Marble Garden Zone.[3]

When the set released in Japan, they removed the Tails toy and replaced it oddly with a Grimace toy from a previous set of toys. The designs of the Sonic and Dr. Eggman toys were also changed to resemble their Japanese designs, while Knuckles stayed the same.[2]

Also in 1994, McDonald's had a Happy Meal anniversary train, which consisted of 15 separate toys from different Happy Meal themes from the past ten years. All the toys were able to connect to one another to create a train.

One of these Toys was Sonic themed. It was a pink and purple TV with a Sega Genesis on the top. When the wheels on the toy roll, the picture on the TV switches between a picture of Sonic wearing a party hat, Tails wearing a party hat, and then Dr. Robotnik running and yelling (Dr. Robotnik is once again designed to look like his Adventures of Sonic the Hedgehog appearance).

Happy Meal box
Add a photo to this gallery

A while after Sonic X appeared on US shores, McDonald's gave out toys for the series in their children's meals (Happy Meal and Mighty Kids Meal). The Japanese Series 2 also shows Chris and Frances working at a WacDonalds, a famous anime parody of McDonald's.

In the UK and Australia, McDonald's released a set of Sonic X disk launchers: one with Sonic, one with Tails, one with Knuckles and one with Shadow on the launchers and the disks themselves.

In 2006, McDonald's of France released fighting top toys of Sonic and Shadow.

In 2007, McDonald's released a collection of Sonic spinning toys in Europe. 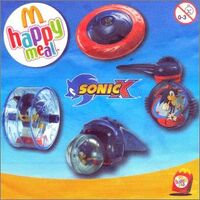 Flyer for the set.

In May 2003, for the United States release of Sonic Adventure DX: Director's Cut, McDonald's released a set of handheld games made by Fisher-Price:

Another set was released in 2004 after the launch of Sonic Heroes that used artwork from the game and featured every playable character except those in Team Chaotix. A game based on Billy Hatcher and the Giant Egg, a video game also made by Sonic Team, was also part of the set. These games had different names and designs depending on the region they were released in, and some regions did not receive these games until 2005.

Being internationally popular, the Sonic McDonald's promotions appeared all over the world. Many different countries produced different kinds of commercials to advertise the Sonic giveaway toys.