Maw the Thylacine, from Sonic Universe #84.

Maw the Thylacine is a character that appears in the Sonic the Hedgehog comic series and its spin-offs published by Archie Comics. He is a mobian thylacine and the Egg Boss of the Tralius Egg Army.

Maw the Thylacine is a mobian thylacine who has yellow fur with black markings on the tip of his ears, purple eyes, and black "V"-shape markings on his forehead and snout. Maw's muzzle appears completely cyberized, being colored gray with a bolt on both sides of his muzzle. He wears an Egg Boss uniform colored mostly black and white with yellow buttons on his shirt.

At a dark, unknown location in Tralius, Maw was summoned by Dr. Eggman to take part in a mission to reclaim Eggmanland from the Naugus Twins and the Witchcarters.[2] At the briefing meeting, Eggman showed him and the other Egg Bosses how he would keep them in line: by paralyzing them as he had an Egg Foreman who had failed him prior. Maw, staying on-topic, asked if Dark Gaia Creatures would be among the resistance they would meet; Eggman assured the shadowy creatures would not interfere (a claim he was later proven wrong on). Maw was partnered with Nephthys the Vulture to shut off the badniks' command signal, as they were both his newest Egg Bosses. Maw, for his part, enjoyed helping Eggman in a "hands-on" way. However, as he and Nephthys reached the control tower, they were ambushed and surrounded by Eggman's bewitched badniks.[3] Maw managed to wipe out their opposition with his vacuum breath, and they rejoined the rest of their team, along with the Witchcarters (who wanted revenge on Wendy). Wendy responding by retaking control of her minions and setting a crystallized Metal Sonic on them.[4] Unable to risk harming his teammates, Maw decided against using his special abilities and so fought the Nauguses' minions unarmed. After a huge skirmish, Eggman finally defeated the twins, forcing Walter to flee while Wendy became his twelfth and newest Egg Boss in exchange for her life. After the incident, Maw returned to the Egg Army base in Tralius with the paralyzed Foreman, intending to use him as a test subject for Eggman's recently-redeveloped roboticizer.[5]

Maw is possibly the most enigmatic of all the Egg Bosses,[1] and usually keeps a calm and collected attitude. Obsessed with robots and perfection, he is hungry for knowledge and will do whatever it takes to change the world to his ideals.[1] To this end, Maw supports the idea of the world being controlled by the Eggman Empire, believing that Eggman's mad conquest will serve the greater good and will "save the world from itself."[3]

Maw possesses highly classified experimental cybernetics that let him swallow entire hordes in a whirlwind of energy. This ability eradicates any traces of Maw's foes while Maw himself remains unaffected. What becomes of those Maw consumes is unknown, although he has hinted that his power is not lethal. He is also skilled in hand-to-hand combat.[4] 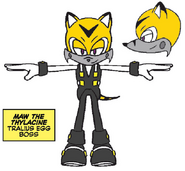 Retrieved from "https://sonic.fandom.com/wiki/Maw_the_Thylacine?oldid=2164314"
Community content is available under CC-BY-SA unless otherwise noted.