Spagonia's number-one troublemaker, who subjects his primary target (that would be Denise) to every manner of prank and shenanigan imaginable. There does seem to be a motive behind Mauro's mayhem though.

Mauro (マウロ, Mauro?) is a character that appears in Sonic Unleashed. He is a human resident of Spagonia and the son of Lucas. Left an orphan due to an accident, Mauro became known as the biggest troublemaker in Spagonia to get attention, but was eventually reunited with his loving father years later.

Mauro was born as the son to Lucas, a local sailor in Spagonia. According to Mauro, he has no mother, meaning he either lost touch with her or that she has passed away. While Mauro was very young, Lucas disappeared in a work-related incident, and everyone believed that he had died, including Mauro.

Though Mauro was left as an orphan, Denise, a friend of Lucas, helped raised him. Regardless, Mauro always felt incredibly lonely from having no parents. As a result, he began playing pranks on the people in Spagonia to get the attention he craved. Out of everyone in Spagonia, Denise became Mauro's primary target for his pranks.

When Sonic the Hedgehog and Chip first arrived in Spagonia, the first thing Mauro did when first seeing the duo was demaning respect from them. Later at night, when he saw Sonic as Sonic the Werehog, he was a bit taken back by Sonic's appearance, but then put on a brave facade and claimed that he took nothing from anybody, not even Denise. Later, he heard rumors about the people in Spagonia changing personality at night. When he later came across Sonic and Chip, Mauro told them about the rumors he had heard, though he remarked that the old people were trying to imitating him, before saying that they were gullible.

Over the following period, Mauro would play several pranks on Denise, such as stopping all clocks in her shop, putting mayonnaise in the shaving cream canisters, changing her price for a haircut and putting glue on the chairs. Whenever Sonic found him during this period, he told him to forget he saw him. Later on, Sonic tried to confront Mauro on his pranks and lifestyle, but Mauro said that he did not need somebody to lecture him, or anybody for that matter.

Soon after, Mauro met Lucas, who had survive the incident, when Lucas came to Spagonia. However, neither Mauro or Lucas remembered each other, the latter due to amnesia. Once Mauro saw Lucas in his sailor clothes, he asked Lucas if he was a sailor. Lucas asked Mauro why he wanted to know, and Mauro told him that his father was a sailor and explained how he disappeared. Lucas then said that he was sorry to hear that, but Mauro claimed that he did not miss him at all. After the meeting with Lucas, Mauro met Sonic and Chip again, and told them that he thought Lucas was a pretty decent guy and that he should become a sailor like him.

After Denise helped Lucas remembering Mauro, Mauro found himself confronted by Lucas who said that he was the boy's father. Mauro asked Lucas in disbelief if he truly was his father, and Lucas confirmed it. Mauro, now overflowing with both joy and confusion, told his father that he had missed him so much and asked him where he had been all this time, before breaking down in tears. As he cried, his father promised that he would make it up to him and that nothing would keep them apart.

Mauro later watched on in horror with the rest of his town, as Dark Gaia began to cast the world into darkness while maturing into Perfect Dark Gaia, but rejoiced as the world returned to normal following Perfect Dark Gaia's defeat at the hands of Super Sonic and the Gaia Colossus.

Mauro never made an in-game appearance on the Wii/PlayStation 2 version of Sonic Unleashed. He did however appear during the pre-rendered cutscenes, where he and the rest of Spagonia watched in horror, as Dark Gaia began to cast the world into darkness while maturing into Perfect Dark Gaia, but rejoiced as the world returned to normal following Perfect Dark Gaia's defeat at the hands of Super Sonic and the Gaia Colossus.

Years of no parental presence made Mauro thirst greatly for acknowledgement and love. Similarly, he also always felt incredibly lonely. As such, he would pull pranks all around Spagonia just to get a response and escape the loneness in his life.

As time passed, Mauro became very cocky, cynical, and proud of the pranks he made. He would always try to act tough and display an indifferent attitude towards everyone while constantly demanding respect and claiming that he enjoyed being alone. However, this was but a facade Mauro used to cover up his own sadness, loneliness and cravings for love. In truth, Mauro is a very emotional child; as soon as he was reunited with his father, the boy broke down in tears over the happiness from seeing him again, the confusion of where he had been, and the anger over his absence. 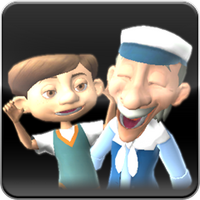 Mauro with his father Lucas on the achievement icon, "Social Butterfly".

Mauro in Spagonia's Town Stage on the Xbox 360/PlayStation 3 version of Sonic Unleashed.