Master Overlord, from Sonic the Hedgehog #10.

Now, Sonic, my loathsome copy! Bow before your Master Overlord!

Master Overlord[2] is a transformation that appears in the Sonic the Hedgehog comic series and its spin-offs published by IDW Publishing. It is the final form of Neo Metal Sonic, achieved through powering up with the combined power of Sonic and Shadow's bio-data, as well as the Master Emerald.

Master Overlord is a dragon-like entity of massive size, dwarfing even the Master Emerald's shrine. He has head armor similar to Neo Metal Sonic's, but with his quills combed more backwards, and he has two red eyes with black sclera aligned vertically on his face. Also, instead of a muzzle, he has a mouth with sharp teeth and red gums. He also has a long gray neck, a chest resembling a blue jet engine with a yellow and black intake, a thin gray spine for a torso section, and a blue pelvis that the Master Emerald is embedded in. Attached to his pelvis are four long, knife-like "legs". He also has a long purple and lavender-striped tail with two axe-like blades at the tip. Also, attached to both sides of his pelvis is a blue fin-like section, each one having three gray metallic wings with long knife-like feathers attached to them. He also has two arms, each of which is mostly made up of a gray cable with a thick blue gauntlet at the end. He also has four-fingered, round dark gray hands with knife-like gray fingers. Also, around each of his shoulders are two blue fin-like sections. Those fins closest to his torso also have three long gray spikes protruding upward from each of them.

As Master Overlord, Metal Sonic is implied to be even stronger than Super Neo Metal Sonic.[2] In fact, it took the combined might of the Resistance's core members and allies to inflict noticeable damage on him, and even this feat was not easily pulled off.[1]

In this form, Metal Sonic is capable of flight and possesses incredible strength, enough to stop an Egg Fleet battleship in midair by hand alone. He is also highly durable, being able to withstand the firepower of an Egg Fleet battleship without a scratch and multiple assaults from highly powerful individuals, although he would be slowly worn down by the latter. Even more so, he could survive having one of his arms blown off and most of his wings torn off. In addition, he could generate and shoot massive crystals as projectiles.[1]

"I will realize Dr. Eggman's dream of a global empire! And nothing you can do can stop me!"
—Master Overlord boasting, from Sonic the Hedgehog #11.

"Come! Let us join the rest of your feeble "Resistance"! You will watch as I destroy them! Witness Angel Island dashed to pieces! Then I will show you the mercy of a swift demise!"
—Master Overlord after capturing Sonic, Knuckles and Shadow in his grasp, from Sonic the Hedgehog #11.

"Begone parasites!"
—Master Overlord being assaulted by the Resistance, from Sonic the Hedgehog #11. 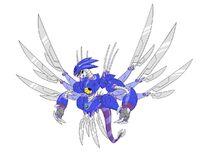