For other uses, see Masher (disambiguation).

Like the Chopper before it, it leaps from waterfalls to defend the bridges.

The Masher[1] (ガブッチョ[2], Gabuccho?) is an enemy that appears in the Sonic the Hedgehog series. It is a mass-produced, fish-based Badnik created by Dr. Eggman that attacks by jumping up and down around bridges.

Mashers are successors of the Choppers and are heavily based on them. They have red metallic bodies with orange underbellies, stretching pelvic fins on each side, a white and orange dorsal fin and a white caudal fin. Like Choppers, their mouths are filled with serrated teeth and have big eyes with black dots for pupils and two metallic screws at their jaw joints.

The first appearance of this Badnik was in the 16-bit version of Sonic the Hedgehog 2, where it served as an enemy. This time around, this Badnik is referred to as Masher[1] (ガブッチョ[2], Gabuccho?). In this game, the player encounters them in Emerald Hill Zone.

Much like the Chopper, the Mashers' only attack in gameplay is jumping up from waterfalls in front of their target on the bridges while they keep waving their mouths. Usually, smaller waterfalls have one Masher and bigger ones have two Mashers jumping on it. Otherwise, the Mashers can easily be defeated with the Spin Jump, Spin Attack or Spin Dash. Upon defeat in this game, Mashers will drop an Animal.

In Sonic Blast, Mashers return as enemies, and can be found jumping up and down at the waterfalls in Green Hill Zone.[3]

Upon defeat in this game, Mashers will reward the player with 100 points, but like in every Sega Game Gear/Sega Master System Sonic game, they will not drop an Animal upon their defeat.

The Mashers are excellent swimmers who can jump up of waterfalls. They also possess powerful jaws that can deliver deadly bites.

In the Sonic the Hedgehog serialized manga published by Shogakukan, Mashers are a Badnik variant that Sonic once got attacked by during a trip through Emerald Hill. However, he easily got rid of them.

In the Sonic the Comic series published by Fleetway Editions, the Mashers are a part of Dr. Robotnik's Badnik army. A single Masher encountered Tails in the Aquatic Ruin Zone, but he escaped before it could finish him off.

In the Adventures of Sonic the Hedgehog television series, Mashers appeared briefly in "Untouchable Sonic" where they and other Badniks chased after Sonic underwater, only to be caught in some seaweed.

Concept of the Masher from Sonic the Hedgehog 2. 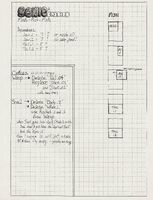 Paper devoted to the Masher Badnik from Sonic the Hedgehog 2.