View source
watch 02:56
Raise a Floppa - The Loop
Do you like this video?
Play Sound
Main page CreditsGallery

Like the previous entries in the Mario & Sonic series, Mario & Sonic at the Olympic Games Tokyo 2020 is designed to be a sports/party game whose cast consists of a crossover of characters from Nintendo's Super Mario franchise and Sega's Sonic the Hedgehog series.[7] By taking control of one of these characters, the player participates in various events based on sports games from the Olympic Games. The game includes a number of events, including returning ones from previous Mario & Sonic titles, such as boxing, soccer, swimming, and gymnastics, and new ones, such as karate, skateboarding, sport climbing, and surfing.[8] The game also features a mode with 2D Events where players can compete in classic 2D versions of events from the 1964 Summer Olympics. Based on older sports games, these events are played using button controls only and only feature eight playable characters.[9] These 2D Events' animations reflect the 8-bit (Mario) and 16-bit (Sonic) game art style. Mario & Sonic at the Olympic Games Tokyo 2020 also features a story mode.[1]

In October 2016, it was announced by Sega that it had secured the licensing rights from the International Olympic Committee to publish video games based on the 2020 Summer Olympics. Their plans were for these games to be released on various devices.[12] On 29 March 2019, at the Sega Fes stage show in Japan, Mario & Sonic at the Olympic Games Tokyo 2020 was announced alongside Tokyo 2020 Olympics: The Official Video Game.[10][13] This game is the first entry in the Mario & Sonic series since Mario & Sonic at the Rio 2016 Olympic Games, which was released for the Wii U and Nintendo 3DS in 2016,[10][14] and was scheduled to be released for the Nintendo Switch in late 2019, with an arcade version sometime in 2020.[10] A companion game for Android and iOS, Sonic at the Olympic Games, was also released on 7 May 2020.[7][13]

The game was featured at E3 2019.[16] The official lanyard that guests of the event received featured new artwork of Mario and Sonic in promotion of the game. A new trailer premiered, and a demo of the game was playable at Sega's booth.

The game was later playable at Sega's booth at Tokyo Game Show 2019, and players were able to receive a limited lanyard and ticket holder.[17] Due to the lanyard featuring flags of characters in the game, it revealed some new characters early. 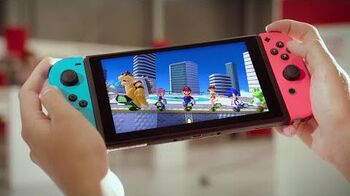 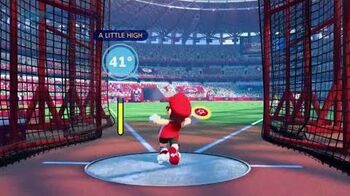