Sonic in Marble Zone, from Sonic the Hedgehog (16-bit).

A tricky dungeon under some ruins.

Leap across pools of red-hot lava and shifting islands. Then find the way to the underground palace where massive weights and flying balls of fire block your path.

Marble Zone (マーブルゾーン[2], Māburuzōn?) is the second Zone of the original Sonic the Hedgehog, and its numerous ports and remasters. It is an ancient underground complex, flooded with boiling lava pools.

Marble Zone is an ancient ruin nestled in a mountain landscape. The ground here features grassy areas that grows on top of the local architecture that encompasses most of the ground, which is mostly made of purple bricks. On the surface, the Zone is filled with various blue stone pillars, and Greco-Roman architecture in the form of columns, arches and walls that are mostly colored green. There are also tall, fern-like trees, medium-sized mountains. Further into the background are also tall purple mountains with a deep blue overhead that features wispy cyan clouds. Underground, this Zone is home to a towering underground dungeon made of purple stone bricks. The dungeon is flooded with lava and includes crushing pillars, spike-tipped chandeliers, lattice windows, torches, pillars, and mosaics.

Marble Zone was one of the many regions on South Island affected by Dr. Robotnik during his quest for the six Chaos Emeralds. There, the doctor kidnapped the local Animals and used some of them to power his Badniks, while leaving the rest of them in huge Capsules. When Sonic the Hedgehog arrived at the Zone however, he saved the Animals and defeated Robotnik in his Egg Mobile.

The main feature of Marble Zone is its numerous open lava pools. Should the playable character touch the lava, they will take damage, although they will not sink into it. The lava also appears on the other side of inaccessible walls. Some lava pools shoot fireballs directly into the air, creating additional obstacles. A few seconds after being fired though, the fireballs will drop back into the lava, albeit only to be fired upward again. The top sections of the Zone are less traversed and feature grassy platforms. Some sections of these terrain rise and fall, much like the vertical platforms in Green Hill Zone. When the playable character stands on these unstable terrain sections however, it will cause them to sink and touch the lava below, thereby setting the grass on top of them on fire. Hidden chambers with Video Monitors can also be found in this Zone, both on the surface and underground. The entrances to the dungeons around Marble Zone are sometimes blocked by green bricks that can be broken for extra points.

Various types of crushers appear in the underground sections. The first type of these crushers are green pistons that slowly rise and fall. There are also two types of gray compactors which are slowly raised up by chains and then dropped downwards. The first variants of these crushers are wide and with spikes the bottom, but their top surface can serve as normal moving platform. However, the player should be careful not to get squeezed against the ceiling by them. Another type of crusher in this Zone is one of the smaller ones and has no spikes on their bottom, but they can squeeze the playable character against both the ceiling and the floor. On the other hand, there are some crushers that are permanently lowered and can only be raised by moving a green movable box down on top of a nearby Switch.

Other gameplay elements in this Zone include platforms made of green bricks that slowly slide in and out from walls. The player must often use these to jump between them at the right time in order to get to the surface.

Act 1 is slow-paced, with the first part taking place on the top surface of Marble Zone, and the rest of it in the dungeons. The outdoors part is a short, introductory path where the player must use grassy platforms to cross a large lava pool before entering the underground dungeons through a moving platform. A notable section here includes a movable box that the player needs to push into a recess to activate a Switch to advance. After some puzzles, the player will exit the dungeons and end the Act.

Act 2 is similar to Act 1, though much longer. A notable section in the dungeon part features flowing lava that will try to catch up to the playable character. Eventually, the player will exit the dungeons, ending the Act.

Act 3 features more alternate paths to take, some of which work as shortcuts. A section in this Act also features a hidden room with a single One-Up monitor, which the player can use to skip some of the Act's sections. Once outdoors, the player will fight Dr. Robotnik in the Egg Scorcher. After clearing this boss, open the Capsule on the right to end the Act.

In the 2013 re-release, there is a secret pathway that can only be acceded by Tails and Knuckles. To access it, the player must fly or climb through a large wall at the beginning. If the player succeeds, they will end up on the pathway, which features some puzles that require them to use their abilities. Later on, the player will fight Robotnik.

In Sonic Drift, Marble Zone (named Marble) is the second track of the game, following Green Hill and preceding Spring Yard (as in its original appearance).

The Marble Zone is also featured in the Adventures of Sonic the Hedgehog television series where it appeared in the second episode, "Subterranean Sonic". Despite the location being named Marble Zone, however, it looks completely different than it did in the video game. In this media, the Marble Zone is the home of Spelunk, a cranky mole who mines the underground tunnels for treasure.

In the Sonic the Hedgehog comic series and its spin-offs published by Archie Comics, the Marble Zone appeared during the "Genesis" story arc: Here, Sonic, Sally Acorn, Boomer, and Antoine traveled across Marble Zone to try and locate Dr. Eggman after Sonic freed the trio in the Green Hill Zone.

After the events of Worlds Collide, Marble Zone became a permanent part of Sonic's World with a history virtually identical to its game counterpart.

In the Sonic the Comic series published by Fleetway Editions, the Marble Zone appeared in the story "Mayhem in the Marble Zone" in the third issue. In this story, Sally Acorn's brother Tufftee ran off to Marble Zone to be a hero, only to captured by Badniks and eventually rescued by Sonic.

In the Sonic X comic series published by Archie Comics, Marble Zone appears as a virtual simulation that Dr. Eggman once trapped his enemies on. During this scheme, after leaving the virtual Green Hill Zone, Sonic arrived in Marble Zone. Exploring the area, he found and rescued Amy Rose. The two then battled a virtual version of Dr. Eggman, and were soon transported to the Spring Yard Zone.

In the Sonic the Hedgehog film series produced by Paramount Pictures and its spin-offs, Marble Zone is an alien zone ruled by Rava the Destroyer that was once visited by Tails during his search for Sonic. 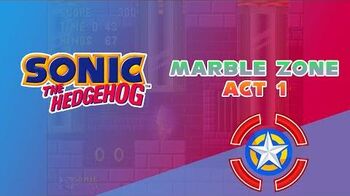 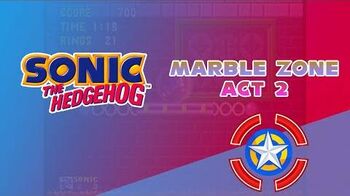 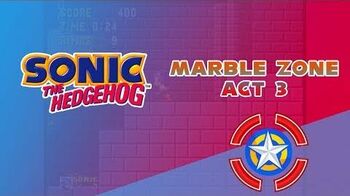