For this power-up's counterpart in the Sonic Boom continuity, see Magnet (Sonic Boom).

The Magnet is a power-up that appears in the Sonic the Hedgehog series. It allows the player to pull in nearby objects.

The Magnet's function is near identical to the Thunder Shield, in that it pulls Rings towards the user though it does not protect the user from damage. Over time though, it has been expanded to draw in other objects as well, such as Crystals and Animals. However, the Magnet can only stay in effect for a short time after being activated.

The Magnet first appeared in Sonic Rivals as an elemental Power-Up whose icon is represented by an actual magnet. In this game, it can be found lying in Acts of Sky Park Zone and onwards. When activated, the user performs the Ring Magnet (when used both offensively and defensively), which creates several magnets appear and start revolving around the user, drawing in Rings from within the vicinity from the user's current location, though the effects only last for a limited time. Any Rings moving towards the player when the Ring Magnet wears off are immediately lost and cannot be collected. To use the Magnet Power-Up, the player must press

In Sonic Rivals 2, the Magnet returned as a Power-Up item which can be obtained at random in any Act. Its effects and usage are exactly the same as it is in Sonic Rivals. The Ring Magnet in this game also has sound effects that can be heard when active and when it wears off.

In Sonic Dash, Magnets can be found inside Item Boxes on the level courses. The duration of the Magnet can be increased by leveling it up.

In Sonic Jump Fever, the Magnet is an exclusive power-up to certain characters, namely Tails, Knuckles, Blaze and Shadow. When active, the user pulses in a red/pink aura but like in previous games, it is used to draw in Rings. The effect's duration is represented on-screen as a circular gauge that depletes over time. Magnet ends once the gauge depletes, the player falls below the screen or touches an enemy or obstacle. The player can refresh the duration of Magnet by collecting additional Magnet TVs and extend its base duration by spending Rings to upgrade each individual user.

In Sonic Runners, the Magnet is one of the Equippable Items for the playable characters. In this game, it can draw in nearby Rings, Animals and Crystals. Like in previous games, the player can level up the Magnet to extend its duration; at max level, it will last for about ten seconds. There are also several Buddies that can enhance or affect the Magnet's effect in some way, such as Reala or the Star-Shaped Missiles.

In Sonic Runners Adventure, the Magnet is a Booster item that can be quipped to the playable characters before a stage. Once inside a stage, the Magnet can be activated upon the player's command by pressing its icon on the HUD. In gameplay, the Magnet can only draw in nearby Rings. There are also several Buddies that can extend the duration of the Magnet under specific circumstances. Also, Hero Type characters possess the special ability to temporarily trigger a Magnet's effects whenever they collect enough Rings.

While a Magnet is in play, its remaining operating time will be displayed in the lower left corner of the HUD, above the Ring counter. 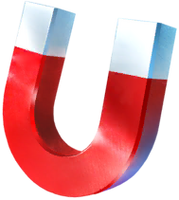 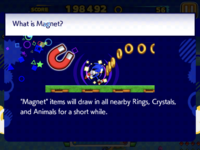