For the Sonic the Fighters arena, see Flying Carpet. For the object in Sonic and the Secret Rings, see Jump Carpet.

The Magic Carpet (マジックカーペット, Majikku Kāpetto?), also known as the Treasure of Babylon, is a Board type Extreme Gear that appears in Sonic Riders. Supposedly the prototype for the world's very first Extreme Gear, the Magic Carpet was the Babylonians' greatest invention and the fabled treasure residing inside Babylon Garden.

While appearing as a piece of cloth, the Magic Carpet's material is the same as those that modern Extreme Gears are made of. According to its profile, it holds the status as a legendary Extreme Gear. It is obtained after defeating the Babylon Guardian in Story Mode.

The Magic Carpet's appearance is that of a regular blue, purple, red, white, and yellow carpet, whose design reflects the Babylonians' culture. According to Eggman, the Magic Carpet's has a rich texture that is a sight to behold and feels extraordinary, which alone could make the Magic Carpet be in high demands over the world.

As a Board-type Extreme Gear in Sonic Riders, the Magic Carpet is well-balanced in its attributes with average statistics, an average rate of fuel-consumption and is suited for general riding.

When Babylon Garden was buried near the Sand Ruins, the Magic Carpet was buried along with it. Histories about the Magic Carpet being the Babylonians' ultimate treasure, however, continued to roam the world, though all knowledge about it eventually faded into obscurity, leaving only misinterpreted beliefs that it was a treasure of immense value or the Babylonians' technology.

In Sonic Riders, the Magic Carpet was uncovered by the Babylon Rogues (under the machinations of Dr. Eggman), who believed it was a valuable treasure, and Team Sonic, who had arrived to help the Babylon Rogues defeat the Babylon Guardian. As the Babylon Guardian faded away following its defeat, it released the treasure chest containing the Magic Carpet, and both teams were surprised to see what the legendary treasure was. Dr. Eggman then arrived and demanded the Treasure of Babylon, believing it was technology he could use to take over the world, and Sonic and Jet smirkingly complied. Surprised, Eggman found the note left by Stolen and realized that it was useless to him, making him faint from the shock that all his efforts put into hosting the EX World Grand Prix that would bring him the treasure had been for nothing. Regardless, Tails and Wave realized that it was an early type of Extreme Gear. Everyone then watched in surprise and wonder, as Jet's Key to Babylon Garden activated the Magic Carpet.

In Sonic Riders: Zero Gravity, the Magic Carpet was seen in Jet's office hanging on the wall. 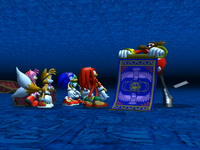 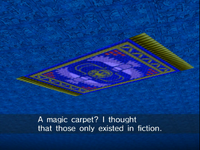