A Board type Extreme Gear with several limitations which can be broken by its Gear Parts.

A collectors' gear possessed by the souls of the hunters of legend. Its parts grow and change.

The Mag (マグ, Magu?) is a Board type Extreme Gear that appears in Sonic Riders: Zero Gravity. When used normally, it has several limitations, such as being unable to perform GP actions. However, it can temporarily overcome those barriers with its Gear Parts.

According to its profile, the Mag is a collectors' Extreme Gear and is possessed by the souls of the hunters of legend. It also says that its parts grow and change. It can be obtained by clearing all of the missions in the game's Story Mode.

The Mag is, like most other Board types in Sonic Riders: Zero Gravity, thicker than the Extreme Gears seen in Sonic Riders, though not quite as thick as most other Board types presented in the game. It has a rather straight shape, and is colored white on the top half and grey on the lower half, with broad cyan metal accents on the front, and a smaller cyan plate on the rear. It has two foot panels on the board's top surface.

As a Board type Extreme Gear in Sonic Riders: Zero Gravity, the Mag is well-balanced in its attributes with about average statistics and is suited for general riding.

In a race, the Mag possesses a very small GP Gauge which makes the player unable to perform either Gravity Dive or Gravity Control normally. However, it can bypass several of its limitations with its Gear Parts. Once the player has activated either Base Stats UP and Attack Time UP, the GP Gauge instantly depletes and the player cannot accumulate Gravity Points by any means possible. 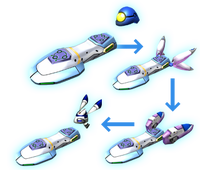 A diagram of the Mag's different transformations caused by its Gear Parts.