Donut Lord lives with Pretzel Lady. She is super nice to animals and strangely was born without bones.

Maddie is an average sized woman with black hair and brown skin and eyes. She wears a wide range of clothing.

Maddie is Tom's wife and a veterinarian in Green Hills, Montana. At some point prior to the events of the film, she marries Tom and attends veterinarian school. She, along with Tom, help Sonic retrieve his rings from San Francisco.

As a veterinarian, Maddie cares deeply about living creatures and enjoys helping them to heal. She scolds Tom not to shoot the raccoons that get into their trash with her dart gun and gets annoyed with him when she finds out he shot Sonic with it. She also shows sympathy for Sonic when she sees that his feet hurt because he wore through his sneakers. She works well under-pressure and shows emotional and intellectual maturity. She is very loving and supportive of her husband. She made him a cake to congratulate him in case he got the job he wanted in San Francisco and another cake in case he did not get it. She also tells him that since he has made sacrifices for her, she is happy to sacrifice for him. 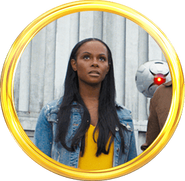