Dr. Eggman's metallic plant, built to house only his own devilish creations and operations.

Southeastern on the world map

A huge plant constructed by Eggman to turn his maniacal ambitions into reality. This is Eggman’s final fort filled with violently moving pistons, giant gears, high-pressure steam valves, and deadly Badniks. Sonic will need to master all of his skills effectively to survive.

Mad Gear Zone is the fourth and penultimate Zone of Sonic the Hedgehog 4: Episode I. As Dr. Eggman's headquarters, Mad Gear is a deadly, mechanical factory surrounded by steam-pouring pipes, cogs and gears.

Mad Gear Zone is featured as the first Act in Sonic the Hedgehog 4: Episode Metal where Metal Sonic travels to from his damaged state back at Little Planet and is ultimately rebooted to full form with Dr. Eggman's factory operations.

Sonic soon discovers that the base isn't so peaceful. Taking in all his past experiences he blasts forward in the lion's den. Running through, Sonic finds that steaming pipes can give him a boost if he needs it, or lift him into an untimely spike death. This is coupled with the fact that old enemies return to give him more trouble. At last, they do not slow him down as he whips through the zone finishing the first descent.

Sonic finds that sneaking in is harder than it looks as he finds himself jumping, hopping, and running on and off cogs, bolts, and gears throughout the base. Sonic will have to balance on gears to get to the next part of the the base.

In this sector of the city, security is tighter and extreme cautionary actions are taken by shutting down the exits ahead. The lights go dark and alarms from the glowing red lights go off. Sonic will have to navigate the tricky passageways quickly or he'll find himself shredded by a giant wall full of eager saws.

Sonic finally meets up with Eggman as he floats down with yet another previous invention; this time around, Sonic can hit the pods, which causes them to deploy a balloon duplicate of Robotnik's self, but when Sonic tries to attack the balloon, he gets hurt; a direct contrast to the original after losing all his pods. Eggman will then flee, but Sonic quickly runs after him in this second phase as he throws small fast and blue ones, and very large yellow ones. After taking a few hits, he will be defeated. ﻿

Flying straight from Little Planet after being reactivated, Metal Sonic arrives in a sorry state at Mad Gear Zone, discovering that Dr. Eggman was waiting for him. Eggman beckons Metal into his machine, powered by the entire facility, which then repairs and enhances Sonic's robotic double, thus revealing the purpose behind the mechanical city's creation. Reborn, Metal Sonic takes off to locate Sonic and destroy him.

The Act is a reworked version of "Act 1 - Dr. Eggman's Secret Base" from Episode I, bearing an altered level design, a higher number of enemies and more obstacles. 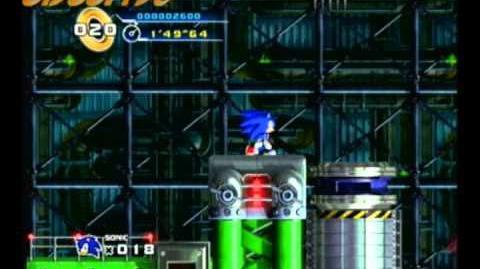 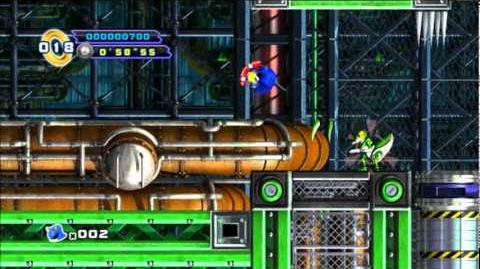