During the early development of Sonic the Hedgehog (1991), Mach was supposed to be the band's drummer. Few sketches in SEGA Mega Drive/Genesis Collected Works art book show Mach being imprisoned along with other Animals in the capsule in the early ideas for the wrecking ball battle, implying that each one of band members were meant to be saved in each Zone of the game. Mach was also originally meant to appear in the early SEGA screen and version of the game's ending.[1] Like the other band members, he was dropped from the final release due to time constraints.[2]

Mach's first appearance out of the concept art is unique compare to his other band members. In this continuity, he shares the same color scheme as a Pocky. His recolor from pink to blue may imply he was made to be the same species as a Critter.

He, along with Sonic and the others, were preparing to play a concert for the Critters and Sonic's Bodyguard Platoon. As their show was about to start, Dr. Eggman attacked their concert, destroying the stage. While Sonic returned and appeared to be fine, Mach's fate from the destruction was not confirmed.

In the Sonic the Hedgehog comic series and its spin-offs published by Archie Comics, Mach appears as the drummer of Mina Mongoose's band, the Forget Me Knots, along with Max (the bass player) and Sharps (the guitarist), and has since been a recurring member of her band.

In the Sonic the Hedgehog comic series and its spin-offs published by IDW Publishing, Mach is an inhabitant of Classic Sonic's world. 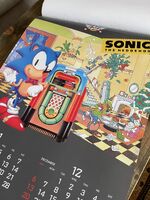