A jungle area with an ancient tomb

Lyric's Tomb (古代の墓, Kodai no haka?, lit. "Ancient Tomb") is the first area in Sonic Boom: Rise of Lyric.[1] It is a dense forest area on an island littered with ruins from the Ancients. It is also the location of the tomb where Lyric the Last Ancient was imprisoned. It is entered upon beginning the game and serves as the game's tutorial level.

A thousand years ago, Lyric the Last Ancient was imprisoned here. In the present, Team Sonic came to Lyric's Tomb while chasing Dr. Eggman, but got trapped inside the tomb. While attempting to escape, they accidentally freed Lyric.

Lyric's Tomb is separated into two areas: the exterior of the tomb and the interior (where Lyric was imprisoned). The exterior is a large and dense forest area in a slightly mountainous region, filled with lush, tropical and colossal trees at the size of skyscrapers. The forest's floor is a rocky surface of dirt and enormous roots that is covered in green flora, vines, rock pillars and chasms. It also includes a few rivers and waterfalls. Among the raw nature, there are ruins of some stone foundations originating from the Ancients and a giant statue.

In the center of the jungle lies the tomb containing Lyric. It is an old, cylinder-shaped building with large gates depicting Sonic and Tails, and a lock only Sonic can open.

The interior of Lyric's tomb is a dark, ancient and smelly stone structure (with a few metallic components). It is heavily affected by the hands of time, having grass and moss growing out of the floor and thick vines coming out of the walls. It contains five rooms in total: one large room in the center where Lyric was contained and four surrounding it. In each of the surrounding rooms there is a device shooting a light beam into a receptacle in Lyric's room which emitted a light that kept Lyric frozen.

A thousand years ago, the Ancients created a tomb to imprison Lyric in after he tried to destroy the world. In recognition of the help Sonic and Tails provided to stop Lyric, the Ancients depicted them on the tomb and equipped it with a lock only Sonic could open. To power the tomb, they used the Shock Crystal not far away.

In the present, on a regular day of thwarting Dr. Eggman's schemes, Team Sonic came to Lyric's Tomb while pursuing Eggman. As Eggman ambushed the heroes with Metal Sonic, Sonic and Tails went after Eggman while Knuckles and Amy went after Metal Sonic. After being ambushed by Eggman's Destruction Troops, Sonic and Tails reunited with their friends at Lyric's tomb whose depictions puzzled them. Attacked by the Destruction Troops and Metal Sonic immediately after, Sonic unlocked the tomb against his team's wishes and had them seek refuge inside. Though Eggman and Metal Sonic were locked out, Eggman was pleased that his plan to awaken Lyric was working. Meanwhile Shadow looked from afar.

Trapped inside the tomb, Team Sonic tried escaping by moving some receptacles in hopes of unlocking a door. However, in the central chamber, they found the frozen Lyric and got trapped. As everyone got angry at Sonic for getting them locked up, Lyric came to life since the team had disabled the system keeping him frozen. As Lyric showed familiarity with Sonic, Sonic tried to spin attack him, but Lyric dodged him and tied them up with his shackles. Lyric then broke out of the tomb, but Tails freed them and converted their shackles into Enerbeams which they used to pursue Lyric. However, Lyric escaped, so Team Sonic turned to Cliff for help.

In Lyric's Tomb, the player passes through the forest and the tomb where Lyric is imprisoned. Here, the player is incapable of manually switching between all four playable characters.

As a tutorial level, the gameplay in Lyric's Tomb focuses on obligatory sections where the player gets to test out the basic game aspects and the playable characters' unique skills. Like other areas in the game, Lyric's Tomb includes speed level sections, where the player runs down a long path with speed-enhancing gimmicks while avoiding hazardous obstacles, and as well slower-paced areas for exploration and combat. The latter half of the area features different puzzles that must be completed to progress, which mainly involves the Button gimmick. Sometimes, rows of Rings also appear to guide the player.

Lyric's Tomb introduces the basic gimmicks for the specific character actions (most of which are introduced in the latter half of the game). This include Spin Ramps for Sonic, Climbable Walls and Ceilings for Knuckles and Balance Beams for Amy. Near the end, the player is also introduced to the Enerbeam, where it is used for combat and an Ener-Rail. Because it is a beginner area, Lyric's Tomb has few and fairly easy enemies. It also has nearly no environmental hazards, except for bottomless pits.

Lyric's Tomb begins in the forest on a speed section with the player assuming control over Sonic and Tails, where the player must avoid obstacles, falling objects and projectiles from Dr. Eggman. Shortly after, Metal Sonic joins the fray, along with Knuckles and Amy for the player to control. Near the end of the speed section, Metal Sonic destroys the road and the player takes control of Sonic and Tails again as they jump over the broken road. After landing, the player has to defeat a group of Destruction Troops, After defeating two waves of Swordsman Troopers, a passage to the forest will be opened. The player then has to follow a fairly calm path with no enemies along it. After Sonic and Tails have spotted the Ancient ruins in the background and decide to head towards it, the player must continue down the path. Along it, the player must cross a gab with a Double Jump. After that, Sonic and Tails split up at a path that divides into two, with the player taking control of Sonic. There, the player is introduced to Spin Ramps, which must be used to climb the pathway. After that, Sonic and Tails will reunite. Following that, the player has to cross a section with numerous pillars. Right after this, the player will arrive at the entrance to the tomb. After the cutscene has played, the player automatically takes control of Knuckles, with the rest of Team Sonic available, as they take on a large group of Swordsman Troopers accompanied by Parasite Snakes.

After the subsequent cutscene has played, the player has to defeat a wave of Swordsman Troops. After defeating the wave and being introduced to the Enerbeam, the fight with the Swordsman Troops resumes, but with Shockers joining the fight too. During this fight, the player has to catch and throw enemies into a statue in front of the arena to open up a passage and unlock an Ener-Rail. This will also automatically end the fight with the Destruction Troops. Grab onto the Ener-Rail with the Enerbeam and ride it out of the tomb. Once outside the tomb, the player will be confronted by Lyric. As the player follows Lyric along the Ener-Rail, avoid his energy blasts by veering left and right. At the end of the Ener-Rail, the player will enter another speed section, where they must avoid obstacles dropped on the road by Lyric. The chase eventually ends with a cutscene where Team Sonic is knocked into the sky by Lyric. After that, the player ends up at Cliff's Excavation Site. 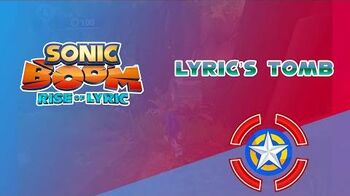