Forest ruins being bombed by the Eggman Empire.

Luminous Forest (ルミナスフォレスト, Ruminasuforesuto?) is the eighth stage in Sonic Forces, and the fourth stage in the game to be played as Sonic.

Located in the Mystic Jungle, this previously unspoiled wilderness sporting the remnants of an ancient civilization is now having its ruins converted into a casino by Dr. Eggman.[1] During the events of the game, the Eggman Fleet attacked the Resistance troops stationed in Luminous Forest through carpet bombing the area.

Similar to the other areas within the Mystic Jungle, Luminous Forest is set in a brown mountainous region at night during a full moon. It should be noted that the mountains in this stage are rather blocky, much like in Green Hill, and there are evidence of a recent rainfall. Also, growing all around are lush tropical trees with round tree crowns, grass, and fern-like bushes.

Also found in Luminous Forest are ancient ruins, such as roads, pillars, road gates, crumbling walls, temples and still-burning torches, most of which are overgrown with plants. All of these ruins have yellow runes/murals that glow. There is as well a river/lake that runs through this stage and giant tree trunks that form half-pipes through midair.

As a result of Dr. Eggman's actions, the majority of the ruins have been converted into casinos. Numerous neon signs in different shapes and colors have been added to the ruins, and ancient temples have been converted into neon palaces. Ancient pillars have similarly been turned into palm-shaped street lights. Further into the stage, one can also see the Eggman Fleet against the sky in the background as they drop bombs on Luminous Jungle, causing large sections of the forest to be set ablaze.

Luminous Forest was originally an ancient ruin. After Dr. Eggman settled in Mystic Jungle though, he began construction in the area to turn it into a casino.[1]

Having received news from Amy that Silver is currently fighting Infinite in the Mystic Jungle while aiding Resistance forces stationed there, Sonic hurries to Luminous Forest to back up Silver. Upon his arrival however, Sonic receives news from Knuckles and Amy over the radio that the Eggman Fleet is scattering bombs all over the place, putting the local Resistance forces at risk. Observing the jungle going up in flames, Sonic soon hears the Resistance troops just about at the point of having to retreat as they cannot hold the line any longer. Sonic, however, assures the despairing Resistance soldiers that they have done plenty. While guided by Amy, Sonic promises as well to make sure that the soldiers' efforts have not been in vain.

As Sonic approaches the ruin where Silver is, Amy warns him of an approaching lifeform. Soon after, Sonic runs into a giant snake, whom Sonic deduces was rudely awoken by the bombings, and is eaten by it. However, Sonic proceeds to repeatedly beat the snake's insides until it is forced to spit him out and lose consciousness from the internal injuries Sonic caused. After that, Sonic makes it to Silver's location in time to save him from Infinite.

In Luminous Forest, there are red platforms that collapse a couple of seconds after the player steps on them. There are also platforms in sets of three attached on chains that revolve around a fixed point. These platforms are useful when the player has to cross gap sections or reach higher ground. In some places, there are also thorn bushes that will damage Sonic in case he touches them.

Being a Sonic stage, Luminous Forest has numerous Wisp Capsules filled exclusively with White Wisps along the way for the player to charge their Boost Gauge with.

At the start of the stage, the player runs down a path from a 3D perspective. Eventually, the camera switches to a 2.5D perspective, and the player will arrive in a section with multiple paths at different heights that all lead forward. Each of these routes uses moveable platforms in some way. At the end of this section, the perspective switches to 3D again.

At the end of the half-pipe, the player must Homing Attack across enemies to reach solid ground, where a Star Post can be found. After that Star Post, the player will then find a new Ramp that will take them to another half-pipe. This half-pipe has the same obstacles along it as the one before and a shortcut that can be found at the start of it.

At the end of the half-pipe, the player will hit some Grind Rails that lead back to solid ground. After then being launched into the air by some Springs a little ahead on the path, the player will initiate a Real-Time Interaction cinematic. Here, the player has to press

when the green rings that appear overlap; the better the player times the button presses, the greater the point bonus the player will receive. During the aforementioned cinematic, a giant snake emerges from the jungle's underground to swallow Sonic in midair. By completing the first Real-Time Interaction, Sonic will hit the snake on its head and run down its back, only for the snake to throw him into his mouth and swallow him. The player must then complete a series of Real-Time Interactions while Sonic ricochets around inside the snake. At the end of the cinematic, the snake will spit Sonic out, causing him to be flung towards the goal. 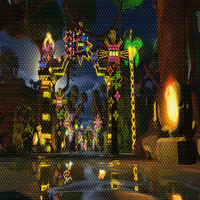