Lucinda is a character in the Adventures of Sonic the Hedgehog television series. She was the love interest of Dr. Ivo Robotnik in high school, but she chose Lucas over him. When Robotnik imprisoned Lucas to get revenge, Lucinda was heartbroken over her loss. Years later, however, she was reunited with Lucas thanks to Sonic the Hedgehog and Tails.

While in high school, Lucinda was lab partners with Lucas, who she was very much in love with, in chemistry class. One day, however, Robotnik attempted to "take care of" Lucas using a robot snake, as he also had unrequited romantic feelings for Lucinda. Seeing Robotnik was the culprit, Lucinda refused all Robotnik's offers to marry him and instead saved Lucas. Because of her choice however, Robotnik took revenge at Lucas by imprisoning him, thus isolating him from Lucinda.[1]

Thirty years later, Lucinda had become a kindergarten class teacher in Mobius' jungle where she was loved by the children, though she still missed Lucas dearly. While heading home one day, however, she heard Lucas, who had been freed by Sonic the Hedgehog and Tails, calling out to her. Recognizing his voice, Lucinda looked for Lucas, but could not find him (unaware he had been caught by Robotnik's Badniks).[1]

After fruitlessly searching for Lucas, Lucinda moped around alone when suddenly Lucas landed in front of her. As Lucinda was overjoyed to see Lucas again, Lucas asked her to marry him and Lucinda gladly accepted his proposal as they embraced each other. Wasting no time, the two of them got married, with Sonic serving as the best man.[1] 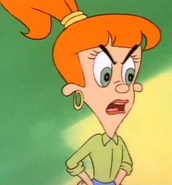 Lucinda when in high school.
Add a photo to this gallery

Retrieved from "https://sonic.fandom.com/wiki/Lucinda?oldid=2212009"
Community content is available under CC-BY-SA unless otherwise noted.