Lucas is a character in the Adventures of Sonic the Hedgehog television series. He was a high-school rival of Dr. Ivo Robotnik over the love of a girl named Lucinda. When Lucinda chose Lucas over Robotnik, Lucas was imprisoned by Robotnik for years until he was freed and reunited with Lucinda thanks to Sonic the Hedgehog and Tails.

While in high school, Lucas was lab partners with Lucinda, who he loved dearly, in chemistry class. As he tried to ask Lucinda to go steady, he was attacked by a robot snake made by Robotnik, who did not take kindly to Lucas as he also had unrequited romantic feelings for Lucinda. However, Lucas was saved by Lucinda when she chose him over Robotnik. When Robotnik built his fortress, Lucas was imprisoned there by the doctor in vengeance, never to be set free.[1]

Thirty years later, Lucas, who now resembled a walking haystack due to never having a haircut during his imprisonment, was freed when Sonic the Hedgehog and Tails came to save him. In the clear, Lucas told Sonic and Tails about his past, before they took him with them to reunite him with Lucinda. After Sonic tricked Scratch and Grounder into revealing Lucinda's location, they headed there. Lucas was initially too nervous to face her, but eventually worked up the courage to talk to her, only to be captured by Scratch and Grounder, and trapped inside a volcano rigged to explode. Fortunately, he was saved by Sonic and Tails again, and he was given a haircut by Tails while Sonic dealt with Robotnik.[1]

Despite being freshed up, Lucas was still nervous about facing Lucinda until Sonic returned and literally threw him in front of her. Though hesitant, Lucas took Sonic's advice about facing Lucinda to heart. He told Lucinda that they had no time to waste after thirty years, and asked her to marry him. Lucinda gladly accepted Lucas' proposal, and the couple soon after got married, with Sonic serving as best man.[1]

Lucas is a nice and friendly guy. After being imprisoned for thirty years, however, he developed a severe lack of self-confidence because he thought he had degraded too much in appearance to be the same person, making him nervous and scared. Eventually, however, he overcame his fear thanks to Sonic and Tails' help.

Lucas when in high school. 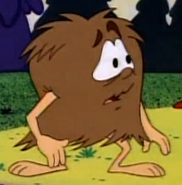 Lucas after being imprisoned for thirty years.
Add a photo to this gallery

Retrieved from "https://sonic.fandom.com/wiki/Lucas_(Adventures_of_Sonic_the_Hedgehog)?oldid=2154096"
Community content is available under CC-BY-SA unless otherwise noted.