A racetrack on an scenic tropical island with corkscrews, beaches, and ruins glore.

Lost Palace is a race track that appears in Team Sonic Racing. It is based off the track of the same name from Sonic & Sega All-Stars Racing.

Lost Palace takes place on a beach in Seaside Hill near an Ocean Palace, a series of coastal ruins. The starting and finishing lines are located where the road from the white and red stone palace connects with the sandy beach. Also, on the sides of the road around the finish line are grandstands, which hosts several cheering Chao.

The track leads through a sandy beach next to the ocean. The track also winds past two waterfalls through to a broken wooden bridge over the beach, leading towards the temple area.

At the beginning of the track, the road will start out as a sandy beach section with a few turns along the way. This section does not have any barriers, meaning that if the player cannot cope with the turning areas, they will drive off the road and into the sea. In some places along this beach section are also some Crabmeats that scuttle across the road.

After the beach section, the player will approach a grassy valley with tall stone walls on each side. After passing through a stone tunnel, the road will make a sharp turn to the left and then lead through a corkscrew. After the corkscrew, the road will turn to the left, then right, and then left again. Along this section are railings on the sides of the road that keep the player from going off-road. After going through these turns, the player will jump over a gap in the road with the aid of a broken wooden bridge that functions like a ramp. The next section of the track consists of a small series of soft turns where the road alternate between being grassy dirt roads and wooden bridges. This section also have cliffs barriers that keep the player from going off-road.

Eventually, the road will become one made of red and white stones. Shortly after this happens, the road will turn sharply to the right and lead to a grassy dirt road. From there, the player will arrive at a broken stone bridge that they can jump off like a ramp. From that stone ramp, the player will land on a stone track that leads past a palace. After then a sharp turn to the right, the road will split in two. Here, the player can either take the longer and safer route on the right that leads across the beach and off a ramp that leads to the final road, or take the shorter road on the left that leads across some shallow water and two islets that function like ramps before leading up to two successive ramps that lead back to the final road. Regardless of which road the player takes, once they are on the final road, they only have to get through some short turns in order to arrive at the finish line.

Lost Palace also has its own mirror image version of it where the left and right sides are interchanged. 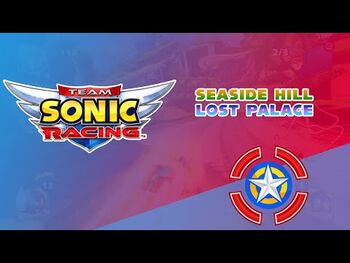