For other usages of "Labyrinth", see Labyrinth (disambiguation).

Lost Labyrinth, from Sonic the Hedgehog 4: Episode I.

A deadly danger-filled cryptic maze shrouded in mystery and surrounded by drowning waters.

Southwestern on the world map

Eggman began his latest research in the remains of this labyrinth. Mysterious traps including giant boulders, moving walls and endless waterways deter any curious explorers. If Sonic gets in over his head, make sure to look for air bubbles nearby!

Lost Labyrinth Zone is the third Zone in Sonic the Hedgehog 4: Episode I. In this Zone, Sonic has to navigate through three ancient trials of the abandoned labyrinth: a trial of intelligence, a trial of darkness, and lastly a trial of water. Sonic will have to be on his "S" game to survive the ancient tests: balancing on boulders, lighting dynamite, and traversing an endless assortment of waterways.

Lost Labyrinth Zone is also featured as the second Act of Sonic the Hedgehog 4: Episode Metal where having left Dr. Eggman's mechanical Mad Gear Zone as a fully-repaired and upgraded robot, Metal Sonic traverses the ruins in order to acquire the Mysterious Orb.

Sonic travels an ancient structure. Finding ancient traps and Badniks, he wastes no time and explores through it, but will Sonic be able navigate the labyrinth or will he be caught by the traps or possibly flattened by giant boulders?

Mobile: Sonic is plugged into a mine cart as the only way of moving the player has to rotate the stage in order to navigate towards the exit, but with twists, loops and Badniks; it will sure be a challenge Sonic can appreciate.

Console: Within the Lost Labyrinth, Sonic sees that the pathway ahead of him is shrouded in complete darkness; he grabs a torch and gets spelunking while facing the second trial: darkness. He comes across a mine cart. It is old and rickety, but with nothing else to hand, Sonic decides "better to die trying". It works as the light from it comes on and it works fine... for now. Sonic then comes across a giant block blocking his way; he sees a red colored rope he accidentally lights, trying to figure out how to get through when BOOM!! The colored rope was a fuse to light dynamite. With this info, he quickly blows through the act. When another mine cart comes up, Sonic rides it all the way through the caves. As the dynamite explodes the blocks under the mine cart, he speeds up and finishes this test unscathed.

Right off the bat, Sonic is hurtled in water. Sonic has to navigate through water that is threatening to drown him. Sonic soon comes into contact with a wet old friend, but the reunion is interrupted when the walls move in to crush Sonic and he has to dash out of there. Sonic slides down the water's treacherous pathways and he will fall through endless loops of the slides if he doesn't figure out the puzzle. Soon after solving, he dashes and passes through this test.

Sonic at last finds Eggman, who laughs then flies away. Sonic runs after him, not letting him get away. Sonic quickly hops over the traps and meets up with the evil genius before the water rises to drown them both. Sonic can hit Eggman along the way in an attempt to finish off the doctor rather swiftly. Soon, Eggman gives a signal﻿ and pillars rise up to block either from escaping the cave. Then pillars come from the sides of the other pillars at the ground and the ceiling trying to crush them both. However, Eggman has programmed the pillars to move in specific patterns and only Eggman knows them. Sonic has to follow him to avoid getting crushed. After taking enough damage, Eggman then retreats and Sonic steps on the Capsule releasing the Animals.

After being repaired and heavily upgraded, Metal Sonic arrives at the Lost Labyrinth Zone and begins to explore the ancient ruins. As he reaches the deeper, darker corridors of the sanctum, Metal discovers a hidden room, discovered and left to him by Eggman. As he ventures deeper inside, he discovers an Mysterious Orb atop an altar which illuminates the entire room. As he absorbs the orb and releases a powerful shockwave of purple energy, Metal Sonic then tears through the walls confining him in the Labyrinth, departing for the electric roads of Casino Street Zone.

The stage is a modified, harder version of "Act 1 - Ancient Maze of Mystery" from Episode I. The Labyrinth is littered with more Badniks and traps than it was when Sonic previously ventured the area and also contains a brief underwater section which is also not present in the said act. 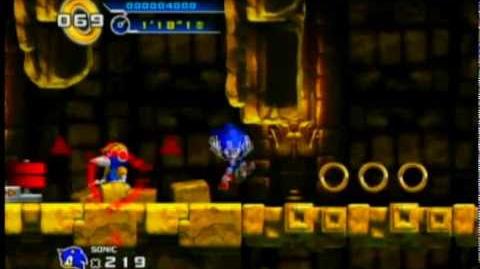 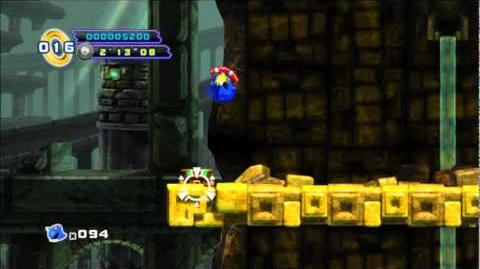