It's a swamp, so be careful.

Lost Jungle is the tenth stage in Sonic Heroes. A watery swamp inside a vast jungle, the level contains black frogs that destroys nearby plant life in contrast to the green frogs seen in Frog Forest. A giant alligator lives in the lowest point of the swamp.

Descending from Frog Forest's canopy, Team Sonic ventures through the depths of the jungle to stop the Egg Fleet to save the world. Team Dark explores the depths of the jungle to pursue Eggman and make him answer for the Shadow Android. In the final steps of the level, Team Sonic and Team Dark must escape a giant alligator that chomps its way to the team. The player must swing on the ivy swings and jump to another until they land on a ledge. Team Rose must escape the jungle to stop the Egg Fleet and impress Sonic. Team Chaotix is tasked to rescue ten Chao.

For this assignment, Team Chaotix is ordered by their client to protect and collect Chao. The normal mission requires them to collect ten Chao, while the extra mission requires that all twenty Chao in the stage are collected. The location of each Chao are as follows:

The following is a list of requirements to attain a rank for each mission with each team.[1] 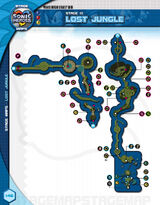 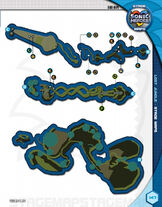