Shadow in Lost Impact, from Shadow the Hedgehog.

My Grandfather's experiments... something's gone horribly wrong. The research lab... It's going to be destroyed. Something must be done! Please, Shadow, I beg you! Help Grandfather and those aboard the ARK. Please!

Lost Impact is one of the fifth Stages in Shadow the Hedgehog. It is set aboard the Space Colony ARK and can be reached by completing the Hero mission of either Mad Matrix or Death Ruins. The stage is set in Shadow's memories as an extended flashback after Artificial Chaos experiments have begun to attack the colony.

After either helping Espio the Chameleon hack Dr. Eggman's Mad Matrix or helping Rouge the Bat clear the Black Arms out of Death Ruins, Shadow comes out of Chaos Control in Iron Jungle and spots Sonic standing on the wing of Tails' new spacecraft. Sonic informs Shadow that the Black Arms are on their way to the ARK, and the black hedgehog agrees to follow them. However, during the spaceflight, Shadow finds a capsule containing the ship's power source: the cyan Chaos Emerald. Making a comment that it's "like taking candy from a baby, which is fine by me", Shadow decides that gathering the Emeralds for himself is the most pressing priority, and breaks the capsule.

The Emerald's energies, combined with the ship's alarm's siren, trigger a memory from Shadow's past, which he slides into. Maria comes to Shadow (who was in the research lab at the time) and tells him that "something's gone terribly wrong with Grandfather's experiments". Maria recruits Shadow to stop the "monsters", which are the rampaging Artificial Chaos. Shadow can agree and hunt down the gelatinous blobs with the G.U.N. forces, or head for the Professor himself in order to ensure his safety.

While never made entirely clear, it seems that this incident is entirely distinct (and preceding) from the eventual G.U.N. attack on Project Shadow depicted in The Doom. Lost Impact has the G.U.N. soldiers fighting with Gerald's staff to suppress the Artificial Chaos. If this is the case, Lost Impact may be the second life-threatening research malfunction on the ARK.

The following weapons can be found in Lost Impact:

The Secret Door houses an armored car, which doesn't have much use in this Stage.

There are no shortcuts available, so this mission requires raw speed, with the Goal Ring being past the seventh Save Point. To maximize speed, remember that the Gun Lifts can be sped up by pressing

The GUN Soldiers will not attack Shadow, so harming them will only lower the score. However, the Heal Cannon can be used to make this mission's A-Rank easier.

By each Save Point, the player should have defeated the following amounts of Artificial Chaos P-100:

The most noticeable change in Lost Impact's Expert Mode is the lack of some Gun Lifts. When the player reaches the first part where a Gun Lift used to be, they should go through the door, and a platform with a rocket will be there. Use the rocket to reach another platform, and use the Dash panel to go forward. After using the Dash panel, the player needs to use a series of Homing Attacks to reach the other door. The Goal Ring is in the area with the final Save Point. 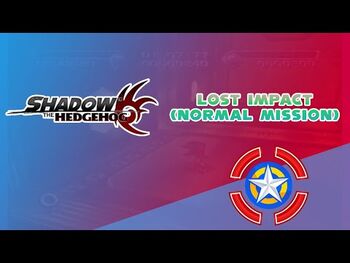 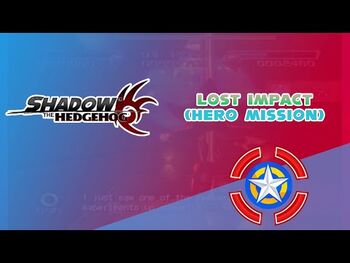 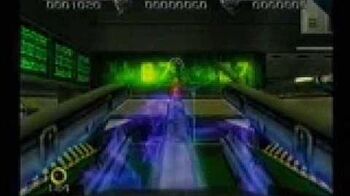