Dr. Eggman in Lost Colony, from the 2012 remaster of Sonic Adventure 2.

The mostly-deactivated interior of the Space Colony ARK.

In gameplay, because everything is shut down in Lost Colony, it is hard to see inside. Dr. Eggman must shoot enemies, which causes explosions that create light that will last for a few seconds. The stage is full of G.U.N. enemies and has an area that is practically a maze, where the player has to find the way to the floor above.

1st Mission: Find the way to the colony's core!

The player should pick up every Ring along the path. Firing at everything ahead can be helpful, but the player must take care not to run into the explosion radius of dynamite. When the player reaches the room where the Jet Engine was, they should take a moment to pick up the Balloons and Item Box beneath the Container south of the center column.

The player should begin by heading for the edge of the first catwalk out in space, and a platform hovering just below on the right can be seen. They should jump onto it to be elevated to another short catwalk with the Ancient Ruin at the end, where they must play the Mystic Melody. A series of platforms will appear which lead to a door, and the player must walk across the platforms, where they will come to a large gap with yet another low-set door positioned on the opposite side. They must Hover across and blast the enemy that appears while in midair to unlock the door. The player then must walk through one last door to find the lost Chao.

The player should keep firing to clear the path of any unseen enemies while they progress. If they are trying to score an A Rank, they must take a little extra time to lock-on to and destroy as many enemies as possible for extra points.

In the Jet Engine's room, the player should walk forward slightly and then go to the right. From there, they will see two Unbreakable Containers stacked on top of an Steel Container. They must shoot the Steel one to drop the Unbreakable Containers, which will form steps needed to reach the platforms above.

The Level Up Item in Lost Colony is the Jet Engine.

It is on an upper level of the stage which can be reached by jumping up Containers. The Jet Engine is required to complete the stage.

During the long elevator ride after the third Point Marker, Big can be seen. He is sat fishing on a ledge on the left side of the shaft. 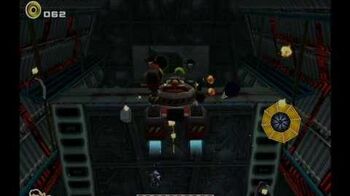 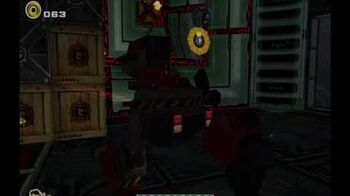 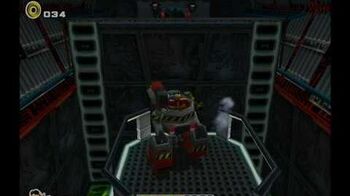