The Lock-On Missile's first appearance was in Sonic Adventure as one of the standard weapon systems used by E-102 Gamma's machine gun. This weapon was later picked up by Tails and Eggman as a part of the weapon arsenal onboard Tails' Cyclone and Dr. Eggman's Egg Walker respectively In Sonic Adventure 2. On Tails' Cyclone, the Lock-On Missile's launcher is the cannon located on the rear, and on Dr. Eggman's Egg Walker it is the cannon on the left side of the cockpit.

When using the Lock-On Missile, the user can mark up to several nearby opponents with a laser guiding system (by holding down the action button) and can then shoot several energy missiles at them in rapid succession which will automatically follow them until they hit. However, the mark from the laser beam only last for a short while, so if the player holds down the action button for too long, all marked targets will disappear and the player would have to start all over marking the enemies.

After the user obtains the upgrade called the Laser Blaster, the Lock-On Missile gains a larger attack radius by creating large explosions upon the energy missile's contact with the enemy, thus allowing it to damage more enemies at once. Obtaining this upgrade also changes the color of the user's energy missiles: Gamma's turns from yellow to light blue, and Tails and Eggman's changes from the shared yellow color to blue for Tails' and green for Dr. Eggman.

In the remake of the game, Sonic Adventure 2: Battle, the Lock-On can target enemies on an much faster rate due to the improved game engine.

Eggman locking onto enemies with the Lock-On Missile's laser targeter 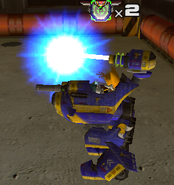 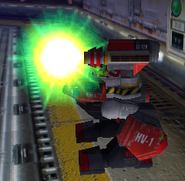 Dr. Eggman's Lock-On Missile after obtaining the Laser Blaster
Add a photo to this gallery
Retrieved from "https://sonic.fandom.com/wiki/Lock-On_Missile?oldid=858074"
Community content is available under CC-BY-SA unless otherwise noted.