A Little Rex in the Xbox 360/PlayStation 3 version of Sonic Unleashed.

These guys will chase you like a dog runs down the mail truck.

The Little Rex (リトルレックス, Ritoru Rekkusu?) is an enemy that appears in the nighttime Stages in Sonic Unleashed. They are a variant of Dark Gaia's Minions.

The Little Rexes are small creatures that mostly resemble a cross between a bulldog and a Tyrannosaurus rex. They have stubby legs, tiny arms, spikes on their backs, a small horn on their snouts and rather large heads with jaws that are very large in comparison to their bodies. Like the rest of Dark Gaia's Minions, they emit purple smoke.

The Little Rexes and the rest of Dark Gaia's Minions came into being when Dark Gaia broke apart at the beginning of Sonic Unleashed due to its premature awakening by Dr. Eggman. These fragments were then spread across the earth and became Dark Gaia's Minions, with the Little Rexes amongst them. They first appear in Chun-nan Night Act I: The Floating Shrine on the Wii/PlayStation 2 version and Windmill Isle Night Act 1 on the Xbox 360/PlayStation 3 version.

The Little Rex alone is a rather weak member of Dark Gaia's Minions. They do not cause much damage and can easily be defeated with a few hits. However, they are very rarely alone and almost always appear in great numbers, which makes them troublesome and dangerous for inexperienced players. The Little Rexes can easily be picked up by Sonic the Werehog in the Xbox 360/PlayStation 3 version of the game, and they can be thrown at other enemies to deal damage. They also come in a stronger variant called Red Rexes.

When the Little Rexes see Sonic, they will squeal, jump upwards and run towards him, pursuing the player everywhere on the field and will not stop until they catch up or the player leaves the area. They usually attack their foes straight-on by flinging their jaws open at them in a swift motion.

Upon the reconstruction of Dark Gaia by Dr. Eggman, all of the Little Rexes (along with the other types of Dark Gaia's minions) were returned to the beast, who was later defeated and sealed within the planet's core.

The Little Rexes are able to move around by either teleporting into an area in a puff of purple smoke or emerging from black puddles on the ground. As a Dark Gaia minion, the Little Rexes can possess people by latching onto the deepest, darkest part of the heart, and generate despair, negative emotions or even erratic behavior that are completely opposite to the person's personality.

Despite their size, the Little Rexes are rather fast on their feet, allowing them to easily keep up with Sonic the Werehog's normal running speed. They also have powerful jaws, giving them a powerful bite, though their bites hardly damage Sonic.

The Little Rexes make an appearance in the Sonic the Hedgehog comic series and its spin-offs published by Archie Comics. In this media, they are Dark Gaia Creatures that began emerging from the core of Sonic's world during the Shattered World Crisis. They first appeared in Sonic the Hedgehog #260, where several Little Rexes and other Dark Gaia Monsters could be seen terrorizing Westopolis in an amateur footage. 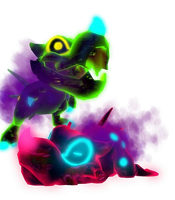 The Little Rex and the Red Rex.