Intact, stuck inside the powerless Death Egg mk.II in space.

Little Planet; a tiny world filled with beauty and mystery. Appearing over Never Lake for just one month a year, it is a place where the past, present and future collide, thanks to the mysterious Time Stones that lie hidden deep within the planet.

Little Planet[2] (リトルプラネット[3], Ritoru Puranetto?), also known as the Miracle Planet (奇跡の星[3], Kiseki no Hoshi?), is a location that appears in the Sonic the Hedgehog series. It is a planetoid in Sonic's universe with mystical properties that appears timely above Never Lake for approximately one month out of every year, and vanishes completely for the remaining eleven months.[3]

Little Planet, as its name hints, is a tiny,[1] spherical astronomical body with features similar to those from Sonic's world. As such, it possesses a breathable atmosphere and its own flora and fauna, which are very like those from Sonic's world. Described as a beautiful world[1] and a center of peace,[4] its surface is mostly covered by large landmasses that make it mainly green in color. There are also various bodies of water that are given a blue color when seen from space. Presumably due to its small size, the various forests and mountains on Little Planet can be seen from far away. Additionally, the planet possesses its own gravitational field. However, much of Little Planet remains surrounded in mystery.[1]

Unlike Sonic's world, Little Planet has many mystical properties; most noticeably, it is able to appear out of nowhere on Never Lake for one month every year,[3] though it is unknown where it can be found for the rest of the year. Additionally, it is able to freely fly around, and is thus unaffected by the gravitational pull of Sonic's world when it makes its visit on that planet. Described as "a world that defies time" and "where past, present and future collide",[1] Little Planet is known for hosting the Time Stones, mystic relics that allow their user to travel through time and re-write history to cause miracles to happen.[3][4] There are also Time Warp signs around the planet, which are used to enter the Time Warp and travel between different time frames: the present, the past, and a fluctuating future, by moving at the speed of light.[5] Also, it is possible that Little Planet might have a will of its own; after Sonic saved Little Planet at the end of its incident, the planet left Sonic's world while displaying sparkles that formed Sonic's face.

The natural environments that can be found on Little Planet are, much like those on Sonic's world, very wacky, colorful, and even abstract at times. These range from deserts and caves, to plateau-like fields and massive, psychodelic forests. There are various artificial areas as well, like cities and massive facilities, though it is unknown where these are derived from. However, it can be safely assumed that the planet has had some civilizations on there at some point, as hinted by the Roman-like cities in the past and the ruins in the present.

In the past, Little Planet used to have more natural environments, with little civilization on it. Despite this, many industrial areas were already under construction. Following Dr. Robotnik's takeover of the planet, it got turned into a huge fortress with no signs of peace.[4] At first sight, however, the changes made in the present were almost unnoticeable and rather vague, the most notable one being the lack of Animals.[4] In the future, though, Little Planet became a polluted wasteland. All the lakes were filled with chemicals and/or waste, while other natural areas had been heavily industrialized. No signs of life were present on the planet in this future. From space, natural areas were seen with a crimson tone and dead plants, while water was dark gray in color. After Sonic reverted the doctor's actions however, the planet's future changed to a futuristic utopia with little to no pollution at all. In addition, all of the planet's areas were filled with life and color.

In Sonic the Hedgehog CD, Little Planet was making its annual appearance over Never Lake as usual. However, Dr. Robotnik took notice of the planet soon after. Coveting its Time Stones and their ability to re-write history, Robotnik chained Little Planet to a mountain near Never Lake and began the construction of his fortress on the planetoid before turning his sights on obtaining the Time Stones.[3] Following a series of rather vague and confusing events, the planet got devoid of peace due to Robotnik's actions. Even though the doctor apparently was unable to travel to the past,[4] that timeline got filled with robot transporters and Metal Sonic holograms, which heavily reshaped Little Planet's future into a dystopic, polluted wasteland. However, in the present timeline, the changes were hardly unnoticed aside from the mysterious absense of Animals, which hid under their breath in fear.[4]

Later, Sonic the Hedgehog went to Never Lake to watch Little Planet from there. To his surprise however, he found the planetoid in its miserable state and still chained to the nearby mountain. Thinking that Robotnik had something to do with this, Sonic traveled up to Little Planet along its chain.[3] There, Sonic discovered that he could restore the planet to its pristine state and free it from Robotnik's control by removing Robotnik's devices in the past and securing the Time Stones. Upon arriving in Collision Chaos however, Sonic met Amy Rose, a hedgehog girl who had come to Little Planet after predicting a destined encounter with Sonic there. Upon seeing Sonic, Amy instantly fell in love with him. However, Amy was soon after kidnapped in front of Sonic by Metal Sonic, an ultra-performance Badnik created by Dr. Robotnik, and the doctor's newest enforcer. Sonic was thus left with the tasks of saving both Little Planet and Amy.

Making his way across Little Planet on his own, Sonic continued to free the planet's areas one by one. By destroying the robot transporters, Sonic was able to trigger a series of changes which steadily reversed Robotnik's actions on the planet and restored its future.[4] Additionally, after the Metal Sonic holograms got destroyed, the Animals were no longer afraid of anything and began wandering around freely.[4] Eventually arriving in Stardust Speedway, Sonic had a race against Metal Sonic. After winning the race, Sonic freed Amy from her restraints in Stardust Speedway and went to Metallic Madness, Robotnik's base. There, Sonic had his showdown with the doctor. After Robotnik was defeated, a chain reaction was triggered that caused the metallic shell around Little Planet to collapse. After Sonic got Amy and himself back to their world, Little Planet then disappeared from sight in a trail of stars in the shape of Sonic's head, now freed from Robotnik's control and with a peaceful destiny to follow.

When the Time Eater later got destroyed, Stardust Speedway was seemingly returned to its rightful place in the timeline.

During their adventure to stop Eggman's scheme, Sonic and Tails could see Little Planet in the sky above Sylvania Castle Zone during their battle with the Egg Serpentleaf. When they confronted Metal Sonic at White Park Zone however, they noticed that Eggman had already begun building the Death Egg mk.II around Little Planet. By the time the duo gave chase to Eggman and Metal Sonic after escaping the exploding Sky Fortress, the Death Egg mk.II had been completed, with Little Planet trapped inside it. After getting onboard the space fortress though, Sonic and Tails destroyed Eggman's final contraption, thus triggering a chain reaction that shut down the Death Egg mk.II. However, the space station remained intact, with Little Planet left inside it.

In Sonic Adventure, its enhanced port Sonic Adventure DX: Director's Cut, and the 2010 remaster, Little Planet is not mentioned in the English version; in the Japanese version, however, before visiting Casinopolis in Sonic's story, the player can find a boy at the station in Station Square that mentions Little Planet.[6]

In the Sonic the Hedgehog manga published by Shogakukan, Little Planet is a small planetoid that occasionally appears over Earth. At one point, it was seized by Dr. Eggman for his own nefarious purposes. However, his plans were thwarted by Sonic and Tails.

In Sonic the Comic and its spin-offs published by Fleetway Editions, Little Planet is referred to as the Miracle Planet. although some also know it as "Little Planet". In this media, the Miracle Planet is a planetoid in orbit around Mobius. It appears for three days out of every month above Never Lake. Once, Dr. Ivo Robotnik cyber-formed the entire Miracle Planet in order to use use it as a power source for Metallix, the Metal Sonic. However, Sonic managed to defeat Metallix and restore the planet to normal by using a Time Stone.

Some time later, the Miracle Planet was taken over by the Brotherhood of Metallix. As such, it was once again covered in machinery, this time making it appear like a giant Metallix head. During this period, it was used as a staging ground for the Metallix's attempts to conquer Mobius. However, their plans were thwarted by Sonic and the Chaotix, and the Miracle Planet was subsequently returned to normal yet again.

In the Sonic the Hedgehog comic series and its spin-offs published by Archie Comics, Little Planet is the hosts to the Time Stones, and appears over Never Lake once a year for one month. It is closely kept as secret by citizens of Albion and the current king of Mercia Rob o' the Hedge himself.

After the Super Genesis Wave re-wrote history, Little Planet and its history are now nearly identical to its game counterpart. 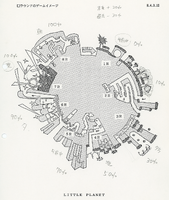