In a stroke of genius, Eggman programmed the hands of his Egg Fighter units with autonomous AI, enabling them to fight on even after the main body fails. Rumor has it the hands and bodies don't always get along too well.

The Little Fighter is an enemy that appears in the Xbox 360/PlayStation 3 version of Sonic Unleashed. They are a model of Badniks created by Dr. Eggman. These small machines are the dismembered hands of broken or defeated Egg Fighters, designed to continue fighting when the Egg Fighters' main bodies cease to function.

The Little Fighters are small humanoid robots who resemble a four-fingered hand with a thumb on each side of the palm. Their torsos are rectangular with rounded corners on the bottom with a pair of three-segmented legs and a two-segmented arm on each side of their torsos. They also do not have either feet or hands. They have a head on top of their torsos, which are shaped like cones pointing down with red lights running along the upper edge.

In their standard form, the Little Fighters are the hands of some Egg Fighter units and Egg Shooters. However, they have been programmed by Dr. Eggman with autonomous AI and possess a separate operating system, allowing them to continue operating and function after the Egg Fighters' main body fails or ceases to function.[1] As such, when an Egg Fighter is destroyed, the Little Fighters can detach themselves from the remains and continue fighting.

The Little Fighters have very simple attack patterns, only jumping around and landing basic strikes on the player.

Despite the Egg Fighters being numerous, the Little Fighters are rarely encountered. They only appear in the nighttime Windmill Isle Act 2, daytime Skyscraper Scamper Act 3, and the last nighttime section in Eggmanland on their own. While not being a significant enemy, they are notable for piloting the Egg Devil Ray and Egg Lancer in the battles against them in the Xbox 360/PlayStation 3 version of Sonic Unleashed. 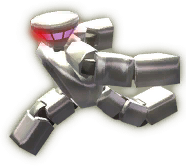 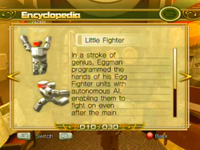 The Little Fighter's profile in the Xbox 360/PlayStation 3 version of Sonic Unleashed.