Thanks so much for saving me, Sonic! Please take me home to Central City!

Little Boy is a character and quest item in Sonic Chronicles: The Dark Brotherhood.

As the team searches for Eggman Devices, they pick up a signal from a cave in the central area of Green Hill Zone. As they draw nearer, they hear the Little Boy's cries for help. The team enters the cave and finds Little Boy being confronted by two Giant Scorpions. After the two enemies are defeated, Little Boy says that he was building a play fort, and that he was setting up his "defense system" when the scorpions attacked. Little Boy then hands over his Eggman Device, stating that he never wants to have anything to do with it again. If the player chooses to, he/she can then receive the Little Boy as a quest item, which can be returned to the boy's father in Central City or he'll walk back to Central City on his own. 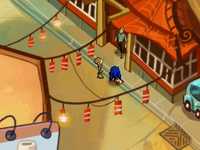 Little Boy as an item