A pair of Shadow's Limiters.

The Limiters (リミッター, Rimittā?)[1][2] are objects that appear in the Sonic X anime. They are rings worn by Shadow the Hedgehog to restrain his power which he has worn since his creation onboard the Space Colony ARK.

The Limiters are golden rings that Shadow the Hedgehog wears on his wrists. When worn, they limit the amount of chaos energy Shadow uses during combat and other situations. They also produce two red cuffs on his wrists for fixation. Shadow can tap into his full strength when he removes them, giving him a drastic boost in power, though at the risk of thoroughly over-exerting himself; Shadow quickly tires out when fighting at just normal power without them.[1]

During the battles with the Metarex, Chris gave the Limiter back to Shadow so he would not lose consciousness in combat. Shadow would subsequently remove his Limiters several times to gain a power boost to combat enemy forces.[3][4][7] 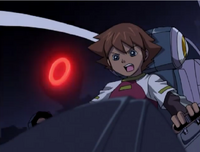 Rings
Retrieved from "https://sonic.fandom.com/wiki/Limiter?oldid=2294495"
Community content is available under CC-BY-SA unless otherwise noted.