The Lightron[2] is a vehicle that appears in the Sonic the Hedgehog series. It is Silver the Hedgehog's personal racing car, specially created by Dodon Pa for Silver to let him participate in his Grand Prix competition.

Personalized specifically for Silver, the default Lightron possesses a futuristic design and sports a sleek sport car shape. It possesses a predominantly gray frame on the lower half and a light gray frame on the upper half. It features glowing cyan lining on the front, rear and sides. It also has a cyan windshield that is connected to a cyan line ending in a circle at the front (similar to the symbol on Silver's gloves). The wheels have cyan lines as well as circles on the casings, with each one having a gold center, like Silver’s gloves and boots cuffs. Also, behind the seat, there is a small generator of sorts encased in cyan glass.

Like other cars in Team Sonic Racing, its appearance can be customized with different paint jobs, performance parts and decals. Its horn can also be changed.

In Team Sonic Racing, the Lightron appears as Silver's race car, specially created by Dodon Pa for Silver. During the events of the game, the Lightron was one of the cars Dodon Pa gave Silver and his friends so they could compete in his Grand Prix competition. Silver would afterward used it during the races and challenges he participated it. However, the Lightron was eventually destroyed when the heroes had to leave it aboard the crashing Final Fortress. Fortunately, Dodon Pa promised to replace it with a new one.

In this game, the Lightron's basic statistics show it has high handeling and acceleration, moderate boost and defense, and slightly below average top speed. However, its statistics, as well as its artistic design, can be modified by replacing its parts.

The Lightron has the following exclusive Performance Parts that can be used to modify it:

In Sonic Racing , the Lightron appears as the vehicle for Silver. 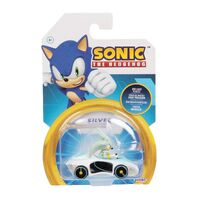