A battle at the Library.

A library with dinosaur bones at exhibit.

The Library (ライブラリー, Raiburarī?) is a fighting arena in Sonic Battle.

This is where the player can find Cream the Rabbit in Story Mode. It is located in Central City. It is located in the government building (called Central Lab) which contained a high-tech government computer. The arena has platforms on each side of the arena, and has a dinosaur skeleton buried in the ground in the middle.

In Tails' episode, Tails brings Emerl to the Library to access data on him. Unfortunately, the data in highly confidential and Guard Robos are sent to attack Tails and Emerl. After defeating several Guard Robos, Tails and Emerl quickly leave. 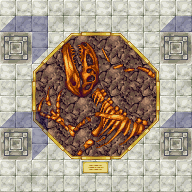 Library map.
Add a photo to this gallery