Shadow and Sonic in Lethal Highway, from Shadow the Hedgehog.

The ruins of a once peaceful city.

Looks like the Black Creatures have turned tail and ran! Let's follow their vehicle and finish what we started!

Lethal Highway is one of the second Stages in Shadow the Hedgehog. It is reached by completing the Hero mission of Westopolis.

After Shadow the Hedgehog destroys the Black Arms in the city, he continues on to a long stretch of highway. Around him, many of the skyscrapers of Westopolis have begun to be transformed and mutated by the Black Arms, despite Sonic and Shadow having taken out many of their soldiers earlier, along with some of their fruit. Black Doom decided to get out of town after acquiring a third Chaos Emerald and demanded that Shadow accompany him with the other two Emeralds thus collected so the Black Arms could escape with three of the Emeralds in their possession. Sonic, however, needed help destroying the Black Arms' lead tank before it could escape the city. If the player obediently follows Black Doom, Shadow will warp to Prison Island. If the player destroys Doom's Black Tank, however, Shadow will then wander about for the fourth Chaos Emerald before stumbling upon Circus Park.

Regardless of the route Shadow took, at the end of the level, he demanded that Doom surrender the yellow Emerald to him. Unimpressed, Doom summoned Black Bull to charbroil Westopolis, Sonic, and Shadow.

The following weapons can be found in Lethal Highway:

Race through the Stage until the goal is found.

The tank takes around six minutes to reach the end of the Stage, which after this point the player will automatically fail to complete the mission. After the tank receives a certain amount of damage, the tank's barrier will gradually wear down, as indicated by the barrier's color changing from blue to green, and will eventually be destroyed. Once the barrier is destroyed, the tank can then be destroyed with just one Homing Attack or just one shot from a gun. If the tank manages to escape before it is destroyed, restart from the last Save Point, though an A-Rank is impossible using this method. If no Save Points are touched and the Stage is restarted before the tank gets away, the tank will still have taken damage.

If the player has beaten the game and has unlocked the Shadow Rifle, massive amounts of damage can be dealt to the tank. After about six hits, the shield will fall. This also gives an A-Rank.

The first noticeable difference in Lethal Highway's Expert Mode is the lack of some rockets. After using the pulley where the first rocket should be, there is a locked spring. So, the player must defeat the Gun Beetle flying in the air just beyond to use the Spring. The player should have a weapon, to shoot it, and then the case will open. Afterward, the player needs to jump out to the rings, and Light Dash the rest of the way. The player's hardest jump will be to that of a pulley over nothing. Try to jump toward it and then Jump Dash for extra distance.

The boss of Lethal Highway is the Black Bull, a Black Arms creature. The guide for this boss is Sonic. The Black Bull's eye is the weak point. Attack it when he bends down to attack or when he releases the birds. There are 5 Rings Item Boxes in some of the corners of the arena. When Black Bull is at half health, Black Arms soldiers armed with weapons will appear on the path. If the boss is shot at with their weapons by the player, it will flee. By using Chaos Control, Black Bull will have virtually no chance of escaping, allowing for an easy kill. 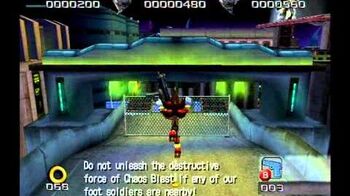 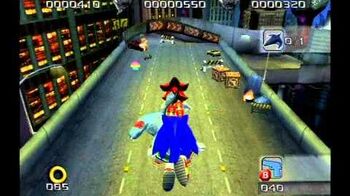 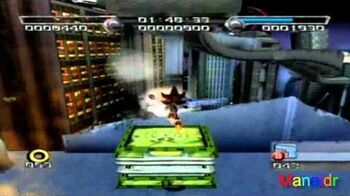