For the character in Sonic X, see Leon.

The Leon, from Sonic Adventure.

The Leon[1] (レオン[2][3], Reon?) is an enemy that apepars in the Sonic the Hedgehog series. It is a mass-produced, chameleon-based Badnik model created by Dr. Eggman which can camouflage itself.

Based on chameleons, Leons closely resemble Newtrons in design. By comparison, Leons have longer insect-like legs with gray and white weights as feet. Like Newtrons, they also have a long tail with a curled tip.

In Sonic Adventure, Leons possess a jungle green, gray and yellow color scheme, while in Sonic Advance, they possess a purple and orange color scheme. They also have shorter legs in the latter title.

In gameplay, the Leons have the ability to turn invisible to avoid detection and sneak on enemies with their tongue and tail lashing.

Leons only use their tongue attack in the Dreamcast version of the game. In Sonic Adventure DX: Director's Cut and the 2010 rerelease, Leons never stick their tongues out and instead continually fade in and out, tending to avoid the player. This altered behavior is due to the Badnik's invisibility timers not being adjusted to compensate for the increased framerate. As a result, it turns invisible too quickly for it to get a chance to attack, and therefore never attacks the player as a result.[4]

In Sonic Advance, Leons return as enemies. They can be encountered exclusively in Angel Island Zone.

In gameplay, Leons simply crawl back and forth within their designated area. Their method of attack is lashing out with their large tongue when the playable character is close. Using the Spin Jump or any melee moves can defeat a Leon easily. Also, upon their destruction, they will release an Animal.

Leons have the ability to turn invisible to avoid detection and sneak on enemies. They also possess a long and powerful tongue and tail. 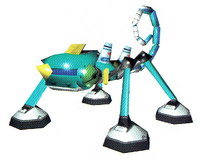 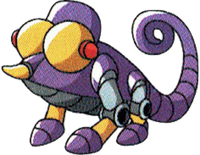 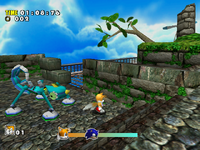 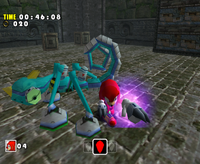