For the robot, see Leon (Badnik).

Leon, from "A Revolutionary Tale".

Leon (レオン, Reon?) is a minor character in the anime series Sonic X. He resided on the now-devastated planet of Cascade and used to be a trusted ally of Molly, working alongside her as a fighter pilot.

Leon and the rest of his team betrayed Molly and made a pact with the Metarex with the promise that if they were to deliver Doctor Eggman to Pale Bayleaf, then the Metarex would allow them to join them, so they could be spared. Knowing that she wouldn't go along with his plan, Leon had put files in the rebellion's base and asked Molly to return there to pick them up, knowing they were set to explode.

After failing to deliver Eggman to the Metarex, they broke off their deal and attacked the rebellion. While Leon was stunned and devastated at the Metarex betrayal, he saw Molly fighting the Metarex and told her to flee. In the Japanese version of episode 68, he and his team watched in horror as she was killed by the Metarex.

After Molly's death, Leon worked for Pale Bayleaf. This gave him the task of handing Pale Bayleaf the Chaos Emerald. The Emerald however, was fake (Which Leon did not know). As a result of this, Leon lead the wrath of Pale Bayleaf on himself and the resistance fighters. Leon was eventually captured in episode 72, along with his teammates. Pale Bayleaf locked each one into a tree, then they were consumed by a tree and died, but not before giving Shadow the Hedgehog and Rouge the Bat information on the Metarex and their plans. Before Leon died, he knew that Molly was right all along (after she left in the English version).

Leon was a staunch resistance fighter, determined to defeat the Metarex to make his home planet beautiful again like it was before the Metarex came. However after some time, he lost his patience and did not want to fight anymore. He became selfish, cold-hearted, and wanted to kill Molly in order to form an alliance with the Metarex. But Leon regret his cruel action and he become heartbroken when Molly died while mourning over her death. 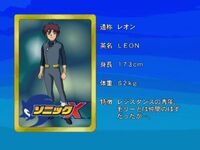