The Legend (レジェンド, Rejendo?) is a recurring Board type Extreme Gear in the Sonic Riders series. It allows its user to perform high-ranked Trick Actions more easily.

In Sonic Riders, the Legend is designed as a white board with slender fins at the rear, and is decorated with red and green stripes on the corners of the rear and two blue triangular fields on the top surface.

As a Board-type Extreme Gear in Sonic Riders, the Legend is weak in its attributes with less-than-average statistics, but has an average rate of fuel-consumption and is suited for general riding.

When in use, the Legend has the ability to automatically jump the highest and longest distance from every Trick Zones, meaning that the player does not have to charge his/her jump, though the player still has to press the jump button when going off optional ramps. This allows the player to always achieve high Ranks from the Trick Actions generated by the Legend's automatic jumps and to almost always reach shortcuts from Trick Zones that gain access to them. Ironically, the downside to the Legend is that it will not replenish its Air Tank when performing Trick Actions.

The Legend made a reappearance later on in Sonic Riders: Zero Gravity. According to its profile, it was used by a legendary Wind Master, whose legacy lives on in the Legend, making the users of the more athletic riders. It can be purchased at the shop for 2,600 Rings.

In Sonic Riders: Zero Gravity, the Legend was given a redesign. In this game, the Legend's shape is changed slightly, having been made more jet-like and aerodynamic, while still remaining primarily white. It also has two blue rectangular panels on the top surface, two blue thrusters on the rear and red highlights running along the side of the edges.

As a Board type Extreme Gear in Sonic Riders: Zero Gravity, the Legend has slightly less-than-average rating in its attributes, but is suited for general riding.

In a race, the Legend can only accumulate Gravity Points through Tricks and obtaining GP Boosts, meaning it cannot earn Gravity Points from accessing Wall Routes or performing Meteor Burst during Gravity Dive. Just like in Sonic Riders, the Legend can improve the Rank on the player's Tricks, though this is entirely done through its Gear Parts.

The Legend made another reappearance in Sonic Free Riders. According to its profile in this game, it is the favorite Gear of a famous Wind Master and can enhance a rider's tricks. It can be purchased from the shop for five hundred Rings.

As a Board type Extreme Gear in Sonic Free Riders, the Legend is well-balanced in its attributes, though with less than average stats and it's suited for general riding.

Just like in two previous titles, the Legend can increase the length and height of the jump that the player can perform when jumping off Kickers, thus making the Rank of the Trick Action performed very high. Just like in Sonic Riders also, however, the Legend does not replenished its Air Tank from performing tricks. It can be equipped with two Gear Parts. 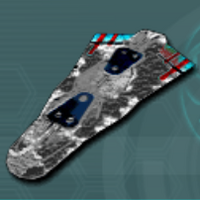 The broken Legend in Sonic Riders.