Shadow in Lava Shelter, from Shadow the Hedgehog.

Pretty ingenious, huh? Nobody would expect a base to be built inside an active volcano.

Lava Shelter is one of the sixth Stages in Shadow the Hedgehog. It is can be reached by completing the Hero mission of Air Fleet, the Normal mission of Iron Jungle, or the Dark mission of Space Gadget.

As Shadow seizes the fifth Chaos Emerald, his fractured memory is starting to come together again. Shadow remembers the fatal fall out of orbit after killing the Finalhazard; waking up in a vat of green goo inside an Eggman base and row upon row of other Shadow Androids, stored neatly in their own capsules. Combined with Eggman's devious insinuations through the previous course of the game, Shadow comes to a final conclusion: that he is a Shadow Android, an Eggman-made copy of the deceased original Shadow. Determined to kill his creator, the hedgehog races towards the doctor's base.

Circumstances, however, do not make things easy for Shadow. In Iron Jungle, despite most of their forces fighting in their war against the Black Arms; G.U.N. has mustered the vast firepower and resources necessary to assault the Eggman Empire. Eggman retreats into a classic supervillain active volcano hideout. Indeed, the only participant of GUN's attack to even make it inside Lava Shelter is E-123 Omega, who asks Shadow for assistance in breaking through to the fat scientist at the base's core. Alternatively, Shadow can slow the G.U.N. forces down by activating the base's defenses, ensuring that his confrontation with Eggman won't be disturbed by the humans.

No matter which route Shadow takes to his final confrontation with Eggman at the base's core, it ends with Eggman facing Shadow in the Egg Dealer with Omega supporting Shadow during the fight.

The following weapons can be found in Lava Shelter:

The Secret Door is located just past the first Save Point, with there being an Air Saucer and a lava path behind it. The Air Saucer makes it possible to cross the lava and therefore collect all the items, which include Rings, 1-Up and a Damage Recover. There are two lava filled paths that cannot be crossed without the Air Saucer. This also makes it easier to traverse in the Dark mission where the lava level will rise upon activating a generator.

The defense systems must be shot three times in order to activate them, unless using the Shadow Rifle, in which case they only need to be shot once.

Triangle jumping across the hallway after the first Save Point will lead to an easier upper route. Don't activate the defense systems from the Dark mission, as they will only make this mission harder.

The player will need to have mastered the Triangle Jump, or they will not be able to pass even the first part Lava Shelter's Expert Mode. Try to stay on the top portion, as it is easier. The first couple of volcanic defense systems are already active, but the Goal Ring has been moved to where the fifth one was. 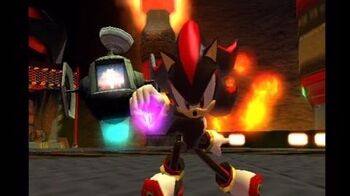 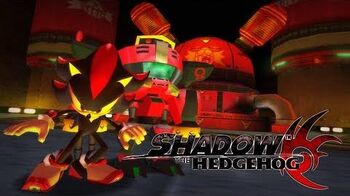 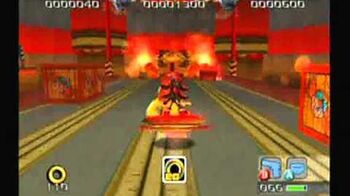