The heart of a great volcano

Welcome back to Angel Island's active volcano. Things are hotter this time with the volcano fully active following the Death Egg's attack in Sonic & Knuckles. Would be a shame if the volcano were to erupt...

The Zone is situated inside of the active volcano on Angel Island. As with most other Zones in Sonic Mania and Sonic Mania Plus, Lava Reef Zone is composed of two Acts, with a boss fight at the end of both.

The Zone takes place in the deep underground of Angel Island, as a sprawling labyrinthine cave system filled with mining machines and seemingly random spiky objects strewn around. Adding to the danger, the Zone is filled with magma and fire-based trappings.

Act 1 is once again a magma-filled mining area with the addition of loops and slopes. There has also been put more emphasis on this Act's hazardous mining environment with the inclusion of metal fences and "KEEP OUT" signs. At the top of the Act, one can see that the Act has an open sky, revealing volcanoes and mountains in the horizon.

Act 2 is drastically different in appearance, and now takes place in a huge and open crystal cavern. There are traces of Hidden Palace Zone around the Act, with ancient structures starting to show up. The Act also borrows artistic visuals from Quartz Quadrant, down to the background being based on the background for the underground of Quartz Quadrant's Good Future. Despite the local magma being newly cooled and turned into igneous rocks, there are even more mining tools that are seemingly more dangerous; even to the point that the Badniks are not safe. The night sky and Little Planet is also visible through the cracks in the ceiling where the Death Egg used to be. The cavern also seems to be the launch site of a giant Rocket Ship bearing Eggman’s Insignia that can be seen in the background, set to launch towards Little Planet.

In their search for Dr. Eggman to foil his plans with the Phantom Ruby, Sonic, Tails and Knuckles ride a flying submarine from Oil Ocean Zone that crashes into a nearby pit of lava in the Lava Reef Zone. Fortunately, the trio get off the submarine before it is destroyed. Midway through the Zone, after taking care of the Drillerdroid, the trio use a Transport to descend deeper into Lava Reef Zone.

Arriving at the bottom of the Transport's shaft, Sonic and co. find themselves on Hidden Palace Zone's grounds. Along the way, the crew gets split up. Sonic and Tails hitch a ride on top of Eggman’s rocket ship, only to arrive into the arms of the Heavy Rider and Jimmy. However, the heroes are able to defeat them. After the Heavy Rider’s defeat, Little Planet, which has once again appeared in its mechanized state, lights up, as Sonic and Tails ride the rocket towards the miniature planet. Meanwhile, Knuckles arrives at the Master Emerald's local altar, just as the Heavy King tries to steal the massive gem. Recalling how Eggman tried to steal the Master Emerald once before, Knuckles stops the theft and manages to make the Heavy King retreat, despite the robot empowering himself with the Master Emerald. Knuckles then uses a Warp Point to catch up with his friends.

While Sonic, Tails, Knuckles, Mighty and Ray ride a flying submarine from Oil Ocean Zone, they crash into a lava pit in Lava Reef Zone. Before the vessel is destroyed though, Sonic and co. manage to get off it. From there, the heroes continue their search for Dr. Eggman to foil his plans with the Phantom Ruby. Halfway through the Zone, Sonic and co. overcome the Drillerdroid when it attacks them. Afterward, they use a Transport to descend deeper into Lava Reef Zone.

Reaching the bottom of the shaft, Sonic and co. discover that they have reached Hidden Palace Zone, but nonetheless proceed forward. From there, there are two outcomes for this Zone:

Act 1 features harmful lava pools, fireball launchers, and magma springs. Other gimmicks and obstacles here include blockades that can be lowered with Switches, walking platform mechs that can barge through any obstacle and enemy and Transports. Throughout the Act, the player will also come across Rock Drills that cause tremors and create pitfalls for the player; these robots, while attackable, cannot be destroyed by any means available to the player.

Act 2 shares many of Act 1's elements, but is even more tricky, with flamethrowers that are set in the most inconvenient of places, strings of iron balls that move around, and switchable Conveyor Belts that carry things like iron balls and Iwamodokis with them.

Act 1 features elements from the first Act of the original Lava Reef Zone in Sonic & Knuckles, but with a few features borrowed from other Zones. Midway through the Act, one of the Rock Drills will cause an earthquake that makes the local magma levels rise, forcing the player to climb up to higher ground. Otherwise, the Act is a modifed version of its Sonic & Knuckles ​counterpart.

Act 2 is a fusion of the original Lava Reef Zone Act 2 and Quartz Quadrant. Strangely enough, only Knuckles can access the warp tubes in the Act.

Like the original Lava Reef Zone, the second Act segues into an area that is considered a "third" Act altogether, only this time it is set in Hidden Palace Zone. When playing through this Act with Sonic or Tails, the player takes the top entrance (which was originally Knuckles' entrance) that takes them to a boss fight atop the rocket ship against the Heavy Rider. When playing through as Knuckles however, the player will take a different entrance that leads through some of Sonic's original Zone layout, to his boss fight with the Heavy King.

The boss of Lava Reef Zone Act 1 is the Drillerdroid, an updated version of the Rock Drill. Throughout the battle, the Drillerdroid will attempt to drop down on the player and cause tremors that release either hazardous rocks or iron balls. To beat this boss, the player first must lure it into burning off its own armor by drilling into magma pockets. After that, land six hits on it and it will be defeated.

In Encore Mode, the player can choose to fight the Heavy Rider instead of the Heavy King, and can use any character against her. Otherwise, the fight is the same as in Mania Mode.

The boss of Knuckles' edition of Lava Reef Zone Act 2 in Mania Mode is the Heavy King, the leader of the Hard Boiled Heavies. The fight begins after Knuckles arrives at the Master Emerald's shrine in Hidden Palace Zone and stops the Heavy King from stealing the gem. During this battle, the Heavy King will jump atop the Master Emerald and use its power to hover around the shrine and unleash lasers, spheres and bullets from his scepter. Land a total of eight hits on the Heavy King in order to defeat him and make him retreat.

In Encore Mode, the player can choose to fight the Heavy King instead of the Heavy Rider, and can use any character against him. Otherwise, the fight is the same as in Mania Mode. 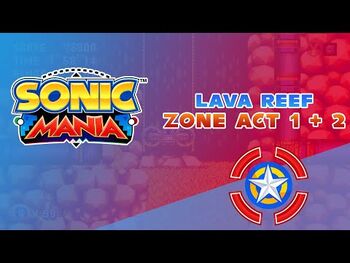