Sonic News Network
Register
Don't have an account?
Sign In
Advertisement
in: Articles in need of expanding, Sonic the Hedgehog 3 zones, Eggman's bases,
and 3 more
English

For other uses, see Launch Base (disambiguation).

Sonic in Launch Base Zone, from Sonic the Hedgehog 3.

The launch site for the Death Egg.

You're getting close to where Dr. Robotnik is repairing his Death Egg ship. This is your last chance to stop the Doc's evil scheme.

Launch Base Zone (ランチベース[2], Ranchi Bēsu?, lit. "Launch Base") is the sixth Zone in Sonic the Hedgehog 3 and the lock-on game Sonic the Hedgehog 3 & Knuckles. In the standalone game, it is also the final Zone of the former, though not the latter. The level features the Death Egg in the background if playing as Sonic or Tails; in Knuckles' version, the background does not feature the Death Egg, having been launched previously in Sonic's story.

Launch Base Zone, being the launch site of the Death Egg, features many defenses designed to keep out intruders. The surface of the Zone is primarily yellow bricks. There are also many pipes that seem to be used for transporting water, as some parts involve the player using the water flow to speed through the pipes; the Zone is, in fact, in a lake. In fact, the facility seems to heavily depend upon the water tubes to provide energy.

It is worth noting that, despite being a large facility dedicated to the reconstruction of the Death Egg, the fortress has no traces of pollution or nature endangerment at all, contrary to Zones such as Scrap Brain Zone or the Chemical Planet Zone in which the liquids are chemical.

In Knuckles' storyline in Sonic the Hedgehog 3 & Knuckles, Knuckles will face the Eggrobo, who will drop a bomb upon defeat and cause the base to explode, causing Knuckles to fall into Mushroom Hill Zone.

Like many of Robotnik's fortresses, Launch Base Zone is protected with an array of hazards, traps, and machinery, such as an alarm system that will spawn a persistent (though easy to defeat) number of Flybot767s, rotating tubes that will make the player move as they spin which later have spikes on the undersides. Other hazards include crushing spikes and flamethrowers, among other obstacles.

Act 2, new hazards include water (adding a risk of drowning if the player spends too much time underwater without an Aqua Shield) and the infamous Robotnik monitor which damages the player if broken. For the player to progress, they must make use of the technology available throughout the Act. Some passageways can only be opened or closed by destroying a nearby monitor, and some of the rotating transports can actually end up reaching the top or bottom of their columns, spin several times to build up momentum, and then be released, flying into the wall to knock the playable character out of them, but without damaging them. Other gimmicks and items include rotating (and sometimes unstable) platforms, laser gates, Dash Panels, circular tubes and even the water system itself.

The Act opens with Sonic and/or Tails jumping out of a trail of snow after arriving in the Zone from IceCap Zone. The player must then make their way across the various buildings, ledges, and passageways. There are multiple paths to take, but most join up again further into the Act. Upon entering a tall building, Robotnik can be found carrying the Twin Hammer under his Egg Mobile, but will quickly flee once the playable character reaches the ledge he is on.

Near the end of the Act, Knuckles tries to blow up the building. However, he escapes and drops down to the ledge outside. After the building collapses, proceed right into the boss arena as Robotnik drops off the mini-boss and departs in his Egg Mobile. Hitting him here does nothing, except cause him to display his usual reaction before he escapes off-screen.

The boss of the area is the Twin Hammer (two of them if playing as Knuckles).

The Act starts in the very room that the Twin Hammer was defeated in. From here, the player must depart to the right and begin making their way across the piping and lake to the Death Egg.

After passing the final Star Post, the player will fight the Egg Cannon. After it is defeated, the playable character will automatically use the Egg Mobile that Robotnik left behind to head to the Death Egg. Knuckles appears on a column of scaffolding to stop them but falls off his pillar when the screen shakes. Afterward, the player is taken to the Death Egg's underside, where they will fight the Egg Rocket.

While Sonic and Tails are able to fight this boss, Knuckles doesn't fight EggRobo in this machine, instead skipping to the Egg Rocket. The first boss consists of Robotnik sitting in a normally unreachable pod that he is seen running up and jumping into, where he controls a mechanism that shoots giant bowling-ball like projectiles, one from a hatch next to the floor of the arena, the other from directly above it. There is a small chain-like platform that opens and closes at a 90° angle. When the lower projectile is shot out, the platform will rise open, giving the player a chance to attack without the risk of being hit by the upper projectile launcher. After eight hits, Robotnik goes down, and Sonic or Tails will hop into Robotnik's Egg Mobile before riding it to a rising platform of his launching Death Egg.

Robotnik will rise and lower from the right and left sides of the platform inside his rocket, which consists of three segments: the first segment holds Robotnik with a small, spiky ball orbiting around him for defense. The second and third ones rotate and shoot beams at the player. Once each segment is hit a few times, it will break off. Finally, the player must avoid the small rotating spiked ball and can deliver the finishing blow.

Sonic and Tails will fight this boss after defeating the Egg Rocket in Sonic the Hedgehog 3, while only Knuckles will fight it in the locked-on version. Robotnik (or EggRobo) will appear in his Big Arms machine, which is covered with spikes. The only place vulnerable to attack is at the glass of the cockpit, which is partially guarded by two robotic hands. If the player is caught in these hands, Robotnik/EggRobo will rise up and thrust down to the platform, causing the player to take damage (even when playing as Super Sonic, although this will not damage Super/Hyper Knuckles for some reason). After eight hits, like many traditional bosses, the scientist will fall and Sonic or Tails will be treated to watching the Death Egg either vanish in a giant flash (Sonic the Hedgehog 3) or fall to a different location, presumably landing on the volcano of Lava Reef Zone (Sonic 3 & Knuckles).

Launch Base reappears in the Nintendo 3DS version of Sonic Generations as the boss level for the Classic Era. The original Big Arm boss is fought in this stage, before advancing into the Dreamcast Era.

In the Sonic the Hedgehog comic series and its spin-offs published by Archie Comics, the Launch Base Zone was originally known only as the Launch Base. Like in the games, the Launch Base is an industrial region on Angel Island, but of unspecified origin. During the comic's run, the location was scarcely visited.

After the continuity was rebooted due to the Super Genesis Wave, the Launch Base Zone became virtually identical to its game counterpart, with the addition of ancient technologies found around it. 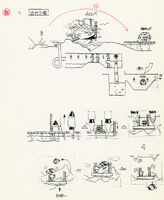 Concept artwork of the zone's map. Taken from Sonic Origins.